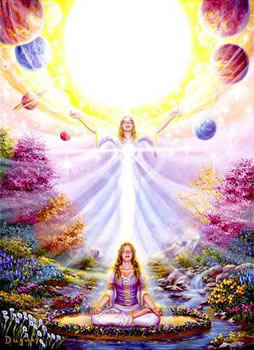 ". . . In ages past, humanity manifested Perfection in every way. This former condition of the race has been chronicled by historians as the Garden of Eden, Eden or E-Don, meaning Divine Wisdom. As the conscious attention or the outer activity of the mind was allowed to rest upon the world of the physical senses, the Divine Wisdom - the All-Knowing activity of consciousness - became clouded, or covered over, and the Cosmic Divine Plan of the individual's life became submerged. Perfection and conscious control by mankind over all form was hidden - and forgotten along with it.

"Man became sense conscious instead of God Conscious, and so manifested that to which his attention was directed and which he thought most upon. He deliberately and consciously turned his back upon the Perfection and Dominion with which the Father endowed him in the beginning. He created his own experience of lack, limitation, and discord of every kind. He identified himself with the part instead of the whole, and of course imperfection was the result.

"All mankind's limitation is the result of the individual's own misuse of the God attribute of free will. He compels himself to live within his own creations until, by the direct volition of the outer activity of his mind, he again consciously looks back to his Royal beginning - God, the Great Source of All. When this occurs, man will begin to remember THAT which he once was and may become again whensoever he chooses to look once more at the Great Cosmic Blueprint of Himself. . . ."