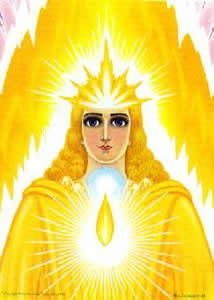 "INCREASE IT, UNTIL THAT FLAME IS SO POWERFUL IN AND AROUND YOU, IT IS JUST LIKE BREATHING! THEN WHEREVER YOU GO, THERE WILL JUST AUTOMATICALLY BE ASCENDED MASTER VICTORY AWAITING YOU! WHEN THAT FLAME MOVES IN BEFORE YOU, OTHER PEOPLE COMING INTO IT, WILL UNDERSTAND IT IS THEIR DUTY TO CO-OPERATE WITH YOU, SO YOUR VICTORY IS COMPLETE! . . . "

". . . IF YOU COULD CLOSE OUT ALL CONSCIOUSNESS FROM YOUR MENTAL AND FEELING WORLD, WHICH WAS NOT OUR COSMIC FLAME OF COSMIC VICTORY, YOU WOULD BE ON THE INSTANT, THE FULFILLMENT OF EVERYTHING YOU CALLED FORTH IN THE RELEASE OF THE MANIFESTATION OF THE DIVINE PLAN FULFILLED!"