Retreat of the Elohim of the Fifth Ray 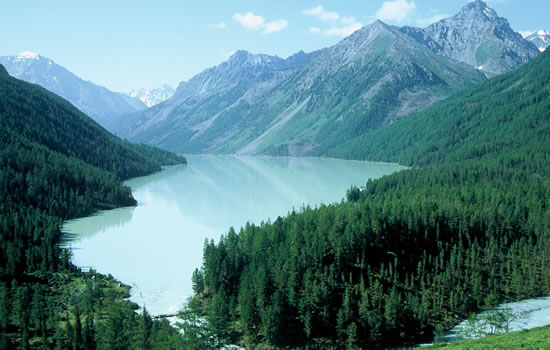 The Retreat of Cyclopea and Virginia, the Elohim of the Fifth Ray of God's Truth, in the Altai Mountains near Tabun Bogdo where China, Siberia and Mongolia meet, focuses the Emerald Ray and radiates the Mighty Stream of Electronic Force of Divine Vision to the entire Earth. Although congruent with the mountains, this entire Retreat is in the etheric realm.

This Retreat has a large emerald crystal front that resembles a church with three steeples. Entering this Retreat, one becomes aware of a reverent silence in recognition of the Divine Truth and Science to which all serving here are dedicated. Passing into various chambers one can see what appear to be "hieroglyphs" on the walls, which are actually ancient records deciphered only for the most advanced Initiates. The central room with a vaulted ceiling and six crystal green pillars sustains a Focus of the All-Seeing Eye of God within a triangle. Here Ascended Masters and Cosmic Beings gather in council meetings to discuss the very destiny of Earth and to develop plans for the implementation of the Higher Sciences through and among embodied mankind.

There is also a "Precipitation Room" that is adorned in green and gold velvet with jade, with Focus of the Sacred Fire — a Flame of Green and Gold — ancored in there. The Green of the Precipitation Flame is a Chinese green, which has more yellow in it and is tinged with gold. In every Retreat of the Great Brotherhood of Light, there is a Focus of the Sacred Fire, and usually the Flame is also anchored in some form of a jewel. The Emerald Green Flame on another Altar radiates Gods Truth to the entire Earth, functioning as a Sacred Energy Center — the Third-Eye Chakra of the planet. In every Retreat of the Elohim, there is a Focus of the Sacred Fire that is maintained at all times.

An indoor garden features a "Fountain of Healing", magnificent flowers and tropical birds. There is a exquisitely rare botanical collection, including some specimens now extinct and others that are yet to be brought forth.

Cyclopea and Virginia invite us to come to their Retreat to regain wholeness by anchoring the single-eyed Spiritual Vision of God, and by learning how to correctly use our Power of Creativity to fulfill our Divine Plan. Only advanced initiates are taken through the remaining rooms, laboratories, libraries and chambers where angels and masters serve the evolutions of the planet through their devotion to the cosmic science taught by the Elohim.