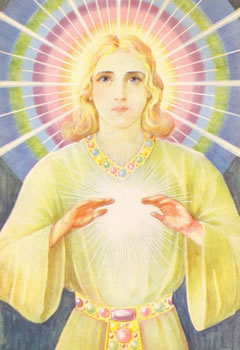 
The Ascended Masters are Individuals who were once embodied on Earth and learned the lessons of Life in Their embodiments. They transcended human limitations and Ascended into Divine Freedom. They gained Mastery over the limitations of the matter planes, * balanced at least 51% of negative karma, and fulfilled Their Dharma (Divine Plan). An Ascended Being has become God-like and a Source of unconditional Love to all Life, and through the Ascension has united with His or Her Own God Self, the "I AM" Presence. Ascended Masters serve as the Teachers of mankind from the Realms of Spirit. The Divine Plan is for all people to eventually attain the Ascension and move forward in Spiritual Evolution beyond this planet. (6)

Ascended Masters are enlightened Spiritual Beings who lived on Earth, faced the same challenges we face today and reunited with God. Today They serve as the Teachers of mankind from the Realms of Spirit. They guide, protect, inspire and heal mankind. They are Teachers in the truest sense of the word. They can help us grow in any area of our lives and achieve the real purpose of life: to become One with God in the Ascension.

Through the putting on of that Mind which was in Christ Jesus, Ascended Masters have mastered time and space and in the process gained the mastery of the self in the four lower bodies, in the lower planes of matter, in the chakras and the balanced Threefold Flame. An Ascended Master has also transmuted at least 51 percent of his karma, fulfilled His Divine Plan, thus qualifying for the ritual of the Ascension – acceleration by the Sacred Fire into the Presence of one's own Individualized "I AM" Presence. Ascended Masters inhabit the planes of Spirit, the Kingdom of God (God's Consciousness), and may teach unascended individuals in an etheric retreat or in the etheric cities on the etheric plane (the Kingdom of Heaven). (5)

It is important for students and people to come to realize that all Ascended Beings are Real, Tangible Beings. Their Bodies are not physical but They can make Them as tangible as our physical bodies are. Although Their God Consciousness is formless and One with the Allness of THE ONE, Their Individual Forms are sustained by the Power of Light, by the Power of Divine Energy, by that Stream of Light, Life, and Love from Within Their Hearts. They have entered into total Oneness with Their Invidualized God Presence, therefore They no longer have to call It forth. They have the use of this Energy in the various Qualifications of the Divine Attributes. Through thought and feeling, They can mold the Cosmic Light Substance from the Universal Sea of Light into whatever They require. Their Bodies are all Light Substance, with the Light Radiating from their Heart giving them the appearance of Beings of White Fire. Our bodies constantly change - because in building them, past human qualification of energy and substance is utilized, while the Ascended Ones retain Theirs Eternally, because Their Activity is only God Reality with no human creation.

The Life of Ascended Masters is Practical and Natural, although it may seem Transcendent from the human sense. When we understand That and can feel It, then They can give greater Assistance. By giving our attention first to our own "I AM" Presence and then to an Ascended Being, that Ray of Light and Radiance from us goes right to the Master. No matter where He is, He knows it - and by directing His Attention through Consciousness - He comes back on that Ray of Light and knows what is required. Mankind has since Jesus' Ministry felt He was so far beyond the human being that it was impossible to reach Him. Yet many times He has wanted to come close and give Assistance, but could not because the individual's feeling held Him so far away." (3)

The Ascended Masters are the "Teachers" of mankind referred to by the prophet Isaiah (chapter 30, verses 20 - 21): " . . . yet shall not thy Teachers be removed into a corner any more, but thine eyes shall see thy Teachers, and thine ears shall hear a word behind thee, saying, 'This is the Way, walk ye in it'." 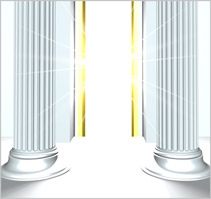 The Temple of The Presence


In answer to Morya and Saint Germain, the Cosmic Councils have released the Dispensation of The Temple of The Presence. At the present time, the Ascended Masters have anointed Monroe and Carolyn Shearer as Their Anointed Representatives™ to the outside world. As with their predecessors in this spiritual Office, Monroe and Carolyn have been preparing for this mission for several embodiments. After training separately in this lifetime, they were brought together in 1993 and received full Sponsorship from the Great Brotherhood of Light (8) for their public service through The Temple of The Presence in May 1995, when the first Dictation was delivered through them - from Ascended Master Morya.

The Ascended Masters Morya El and Saint Germain are principal Sponsors for The Temple of The Presence, together with the Lord Maha Chohan, Lord Maitreya, Gautama Buddha, and the Seven Holy Kumaras. The Messengers deliver Discourses and Dictations directly from the Masters who are Themselves present in Their Ascended Bodies. The Release of Light that takes place on these occasions surpasses all previous experience of those in attendance. Those who have been privileged to take part in the implementation of this new Dispensation have been blessed beyond measure by the Opportunity to work with our Ascended Brothers and Sisters and receive Their very Personal Instruction. (7)

Today in the twenty-first century, the Ascended Masters are publicly releasing the correct understanding and Teaching of the Truth of the Law. On October 11, 1998, Beloved Vesta promised that this clear defining of the facts will continue to occur through The Temple of The Presence and will be "an ongoing Release of Light from the Heart of the Great Central Sun to bring forth the Truth and the Reality of God. Where there is error, where there is a misrepresentation, it will be dispelled by My Representatives. And My Representatives will go forward in the Fullness of the Light. And where that Light stands, no untruth, no unreality can stand." (9)

Note: * "Matter planes" refers to the atomic and molecular structures on a planet in which the Incarnation of the Heart Flame of the I AM Presence takes place. The lower planes (dimensions / wavelength frequency resonance) are sometimes correlated with physical solids, liquids, and gases; the higher subplanes of the physical octave are sometimes referred to as "etheric" and not normally perceivable by the physical senses. The matter planes also include the emotional, mental, and memory levels of our Earth. Gaining "mastery over matter planes" means learning to consciously use 100% of one's Creative Power (from within the Threefold Flame of the Heart) of thought, feeling, and spoken word to externalize greater Perfection, Joy, and Love in the world, as opposed to using thoughts, feelings, and words to create greater limitations, bondage, and chaos in one's own experience and in the world at large through carelessness and lack of awareness of the extent of one's influence in the world.

Book of Wisdom,   Chapter 3, verses 1 - 9; Catholic Bible Godfre   Pearls of Wisdom ®,   (The Summit Lighthouse ®, 1958), Volume 1, Number 17, December 5, 1958 Copyright © 1997 Church Universal and Triumphant ® Luk, A.D.K.   The Law of Life Enlightener "Ascended Beings" - Volume 5 Number 3  (Pueblo, Colorado: A.D.K. Luk Publications, 1989) Prophet, Elizabeth Clare   Great White Brotherhood in the Culture, History and Religion of America, Fifth Printing (Livingston, Montana, Summit University Press, 1987) Prophet, Elizabeth Clare and Prophet, Mark L.   Saint Germain on Alchemy: For the Adept in the Aquarian Age, Second Edition, (Livingston, Montana, Summit University Press, 1986), page 361 Glossary of Ascended Master Terminology   Definition of "Ascended Masters" from The Temple of The Presence Glossary Buresz, Allen   "A History of Ascended Master Activities" The Brotherhood of Light, also known as the Great White Brotherhood, is a Spiritual Order of Hierarchy and an organization of Ascended Masters united for the highest Service to God in all life. This Brotherhood and Sisterhood also includes Jesus the Christ, Gautama Buddha, Mother Teresa, and many Ascended Teachers of mankind, Members of the Heavenly Host such as Archangel Michael, the Spiritual Hierarchy directly concerned with the Spiritual Progress of our world, as well as certain unascended chelas. The word "white" refers not to race, but to the aura (halo) of the White Light of the Christ that surrounds the saints and sages of all ages who have Arisen from every nation to be counted among the Immortals. Vesta, October 11, 1998, (Chelsea, Vermont: The Temple of The Presence ®, 1998) Copyright © 1998 The Temple of The Presence ®