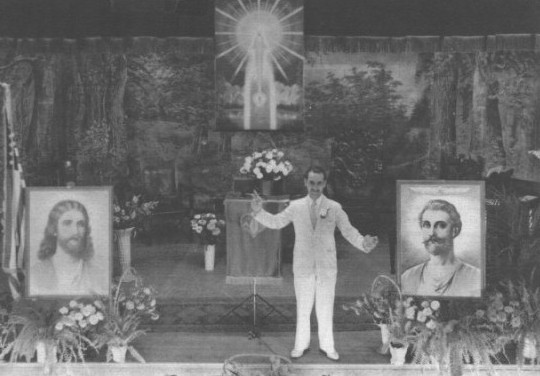 William J. Cassiere conducting an "I AM" Activity Class in 1937

William J. Cassiere, known lovingly as "Brother Bill", was one of seven Messengers appointed by Ascended Master Saint Germain to work with Mr. Ballard. He started assisting Mr. Ballard right after the experiences on Mount Shasta, as recorded in Unveiled Mysteries. While living in the basement of the Ballards' home in Chicago, "Brother Bill" witnessed some of the early Dictations of the Ascended Masters. He also saw the "letters of Living Light" from which Mr. Ballard gave his public Discourses.

"Brother Bill" prepared the way for Mr. Ballard, explaining the book Unveiled Mysteries in many cities, large and small. His expertise in Biblical knowledge helped him in this task. After the Ascension of Mr. Ballard, Brother Bill left the "I AM" Activity. He continued his travels throughout the United States until 1985, using as the basis for his talks the Dictations of the Ascended Masters, as given through the Messengers Mr. Ballard and Geraldine Innocente.

In a Dictation given on August 18, 1939, Saint Germain announced that Brother Bill had earned his Ascension. Mr. Cassiere continued giving lectures and teaching about the Individualized Presence of God, the Violet Flame, the Name of God - "I AM", and the Ascension right into his final 90th year in a physical body. Based on his decades of service and Beloved Saint GermainSaint Germain's 1939 Dictation, Brother Bill is presumed to have Ascended and become totally One with his Mighty I AM Presence in 1985 upon departing his physical body.

"Don't be down on what you're not up on. Too many people pass snap judgment on things they know nothing about. Just because you do not understand a thing when it is first brought to your attention does not mean at all that it is not true. People often mistake opinion for knowledge. Jesus performed miracles because He knew the Spiritual Laws governing such possibilities. Chemists are miracle workers, doctors are miracle workers, electricians are miracle workers even as you are a potential miracle working person. Yes, you are! Know the Law and it works for you! Sometimes, if you have enough faith, it will work for you anyhow whether you know the Law or not. Jesus said, "Ask, and ye shall receive; seek, and ye shall find; knock and it shall be opened unto you." ASK, SEEK, KNOCK. Now take the first letter of each of these three words, you have ASK! Well, whom do we ask? "Ask God," is the reply. You may ask persons until you are blue in the face and receive nothing. But, "Whatsoever ye ask of ME, BELlEVlNG, that shall ye receive!" (Mark 11:24). "Me" is GOD. "I AM THAT I AM!" "This is My Name forever; this is My Testimony unto all generations." (Exodus 3:14-15)

"Let me give you my hand in the days ahead, for even as God has said, "Call unto Me and I will answer" - even I say, "Fear not; follow thou the Law."