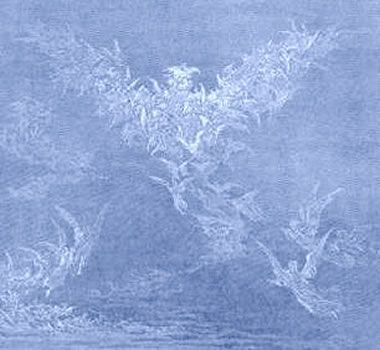 " . . . I unroll the Scroll of Light, and oh, what a Fiery Scroll it is, beloved! Upon this Scroll is inscribed the full outpicturing of the Mighty Blue Eagle - the Angel Formation of the Legions of the God Star Sirius. This Blue Eagle takes the form, for this action for this planetary body, of the bald eagle of the United States of America. Yet it is blue, and when you study its components you will see that every feather and part is a Blue Flame Angel. And it is a vast formation that fills the starry heavens. . . . "

" . . . Come with me as I accelerate your consciousness into the etheric octave. We shall rest above North America and we shall understand the meaning of the Mighty Blue Eagle that is in fact a configuration of Blue Lightning Angels who are in the charge of that God Surya, that ancient one of India who does sit in the seat of the Central Sun of Sirius. . . . "

Beloved Surya, Hierarch of the Great Central Sun in the God Star referred to " the Angels of the God Star, the Mighty Blue Eagle that is also become the symbol of this nation" (U.S.A.).