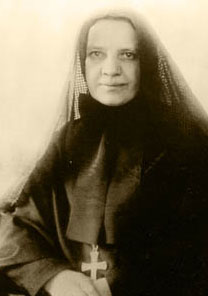 Mother Cabrini has Ascended and become One with Her Beloved Mighty I AM Presence in the Victory of the Ascension following a lifetime of sefless service to the Christ in the poor, sick, suffering, and homeless. Beloved Mother Cabrini is now an Ascended Lady Master - a part of the Ascended Host of Light. (17)

Frances-Xavier Cabrini was born Maria Francesca Cabrini on July 15th, 1850, in the town of San Angelo, Italy. She was the youngest daughter in a family of thirteen children. Although described as a delicate and shy child, she was very strong-willed, intelligent, hard-working, obedient, prayerful, and devout. From earliest childhood, she was determined to work in foreign missions, especially in China. This inclination needs stressing in view of her later career, for until ordered by Leo XIII to labor elsewhere her life's resolve and ideal was to enter some religious institute with convents in the far east. She was educated by the Daughters of the Sacred Heart and, being destined for the teaching profession, obtained the certificates required by the government; but her earlier life seemed a series of frustrations.

Soon after qualifying, she lost both parents within a year. At the request of the priest of a neighboring town, she taught successfully in the local school, besides doing fine apostolic work, but, feeling that as regards her vocation she was wasting time, she applied for admission first to the convent above mentioned and then to the Sisters of Cannossa, whose work was devoted to oriental missions. To her dismay, both superiors rejected her on the grounds of insufficient health.

Very unwillingly, but obeying the bishop of Lodi, she accepted the position of superior of a small orphanage known as the House of Providence at Codogno, badly mismanaged by three women who professed to wish to make religious vows. Six miserable years followed until, in 1880, realizing the hopelessness of the task, the bishop closed down the orphanage, and thus addressed Sister Cabrini: "You want to be a missionary. I know no institute of missionary sisters, so found one yourself."

Frances quietly consented and, with some half-dozen girls from the former orphanage, founded the Missionary Sisters of the Sacred Heart. They began in a small former Franciscan friary, and, as was the case with most of their convents, almost without means. However, heroic trust in God was Mother Cabrini's great characteristic, and to the end she lived up to the motto chosen for her congregation: "I can do all things in Him who strengtheneth me" (Philippians 4:13). The episcopal approval was received on December 29th, 1880, and it was said that the institute "never knew an infancy."

Foundations followed quickly in Milan and elsewhere in northern Italy and finally a house in Rome, although opposition and disapproval from the Cardinal Vicar and others had to be overcome first. That foundation led to the complete re-orientating of Frances's career and to the sacrifice of her life's longing. In 1888 she secured the decree of papal approbation of the congregation. At that period, the pope, most of the clergy, and, it might be added, very many serious-minded Italians, were deeply concerned over the mass emigration to the Americas of millions of their poor, illiterate countrymen, the results of which threatened to be socially and religiously catastrophic. Ignorant of the real conditions overseas and unable to speak a word of any language but their own, the emigrants were in the hands of agencies whose sole object was to exploit them. The repayment of the passage money advanced by these agencies meant a crippling burden for years, even after the debtors had found work.

The bishop of Piacenza, Monsignor Scalabrini, aided by other chursh officials, determined to devote himself to solving the problem. The Society of Saint Charles was founded in New York to care for the emigrants, but Italian Sisters were desperately needed. In 1887, being in Rome, the bishop proposed that Mother Cabrini should undertake the work.

At first she firmly refused, but a curious series of happenings finally compelled her to face the question, and she laid the whole situation before Leo XIII. His decision was thus expressed: "Not to the east, but to the west," adding, "You will find a vast field for labor in the United States." Mother Cabrini therefore gave up her plans and devoted herself to the new endeavor, which, although she had declared it "too easy," she soon found it was to provide her with many for the rest of her life.

After having twice invited her and informing her that an orphanage, school, and convent were being prepared, the archbishop told her when she arrived in New York, in March 1889, that the plans had fallen through, and advised her and her companions to return to Italy. He had disagreed with the temporal foundress and withdrawn his permission. However, Mother Cabrini reconciled the parties and the foundation was made, to be followed by a chain of others, spanning the continent from New York to California.

Mother Cabrini, with her Missionary Sisters of the Sacred Heart, established more than fifty institutions. Besides schools of all grades and charitable institutions of all kinds, she founded four great hospitals, with nurses' homes attached, one each in New York and Seattle, and two in Chicago. To these homes, as to her schools, she readily admitted all who were willing to keep the rules, both Catholics and non-Catholics. Houses were opened also in Central America, Argentina, Brazil, France, Spain and England, besides several more in Italy.

Pope Leo XIII supported the founder unfailingly, as did his successors. However things still did not always go smoothly. She had to face opposition from both priests and laity. Parties formed against her; two revolutions destroyed her Central American convents; two lawsuits imperiled her work in Italy. Yet she unswervingly persevered. Money came in as she needed it, as both Catholics and non-Catholics showed their generosity. When all seemed to fail, God seemingly worked miracles.

Mother Cabrini usually chose not to speak of her inner spiritual life, choosing to focus others' attention on a life of intense hard work and service to the Christ in the poor and homeless. There are several recorded instances of miracles in Mother Cabrini's life, but she made light of these instances and kept them to herself.

One story tells of one of Mother Cabrini's pupils who suffered from varicose veins for many years. Her doctor had advised her to wear elastic stockings, but somehow she obtained a pair of Mother Cabrini's cotton stockings and was cured the moment she put them on. "I hope you are not so foolish as to say my stockings cured you," said Mother Cabrini. "I am wearing them all the time and they do me no good. It was your faith that did it. Say nothing about it."

In 1909 Mother Cabrini became a citizen of the United States of America in Seattle, Washington, and spent much of her time traveling between Chicago, New York, New Orleans and Seattle where many of her institutions were established. She passed from her physical body at Columbus Hospital in Chicago, an institution she had founded in 1902, on December 22nd, 1917. The Roman Catholic Church honors beloved Saint Cabrini yearly on that date of December 22 by proclaiming it to be her feast day.

After her passing, more that 150,000 reports of miracles were sent to the pope by people from all over the world. Pope Leo XIII called her "a woman of fine understanding and great holiness . . . she is a saint." On August 6th, 1938, she was beatified by Pius XI, and on July 7th, 1946, canonized a saint of the Catholic Church by Pope Pius XII. On September 8th, 1950, Pope Pius XII named Mother Cabrini the "Heavenly Patroness of all Emigrants" and described her as "an extraordinary woman . . . . whose courage and ability were like a shining light."