Adventures With the Secret Peacemakers 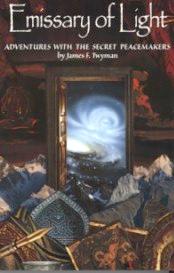 Miracles often occur in the most unlikely places and at unexpected times. For a year, mysterious forces worked to draw Jimmy Twyman to war-torn Bosnia and Croatia. He was led to a secluded mountainous area to visit a community known as the Emissaries of Light. This is the incredible story of a secret society reputed to have existed for thousands of years, silently and secretly invoking the greatest spiritual Power in the world's areas of greatest bloodshed and conflict. The author was the first outsider invited to witness their amazing meditations, and learn the mystical truths that formed the foundations of their ancient work.

Emissary of Light is as dramatic as it is compelling. It follows the author's journey from Boston to Croatia, then back to Sarajevo months later where he narrowly avoided an assassination attempt. While visiting the sacred community, Twyman found himself caught between two sides in a devastating war. He was able to witness first-hand the Power of the Emissaries as they came close to discovery and destruction by the Bosnian-Serb army.

Emissary of Light is also a guide to discovering inner peace by releasing fear. It is a book of Wisdom, wrapped within an amazing adventure. Through it, we learn of the Power each of us has to make a difference for peace and transformation - no matter how savage the inner or outer conflicts.

This is a book that will change your life forever.

Following in the spiritual tradition of James Redfield's phenomenally successful The Celestine Prophecy, Emissary of Light tells the true story of one man's incredible journey to a secret, ancient community of "Peacemakers" in the midst of war-torn Bosnia and Croatia.

"An important book for our time." - Spirit of Change magazine.

"All my life I have been haunted by God." I remember the first time I heard my friend Lisa Wagner say those words. It was during her one-woman play about the life of Dorothy Day, and it exploded within me. I too had been haunted by God. As a small child I felt a mysterious, passionate longing for the Divine. I thought mystical experiences were natural, that everyone was having them, and because my roots were deeply imbedded in my Catholic upbringing, it seemed I had but one recourse. A month after graduating high school I joined a monastery. I would become a priest and devote my life to prayer and silence, seeking some sort of mystical union with my Beloved. I had dreamt of that day for many years, and when the huge iron gate closed behind me I knew I had crossed over to a new world.

"But the empty stillness of the ancient rituals echoed within me and left me cold. Whatever it was I was searching for, I wasn't going to find it in the magic formulas and dogmatic insistence of any institution. I had to leave, to search on my own. I was like Siddhartha leaving the ascetics, or the Buddha leaving his father's palace. Even if I had to wander alone, it was my heart I would follow, and no one else.

"I have always been a man of paradox. As a child I was the black-sheep, either praying in church or serving detention after school. Though I have been blessed with many gifts, I believe my greatest attribute is that I am common - ordinary. I am no smarter, no taller, no more special than anyone. The one thing that has set me apart is my desire to servc to be an instrument of Peace. St. Theresa of Avila once referred to herself as a broom kept in the corner of the room. Whenever the floors became dirty she was ready to be used, a tool in the hand of God. I lived and worked in Chicago with homeless men and women living with AIDS. This is how I was used. This is when I began to feel myself moving once again back to my source, the place I felt when I was a child, and which had haunted me ever since.

"Several years ago I decided to apply my life-long gift for music to my spiritual quest. I wanted to be like St. Francis, a homeless, penniless troubadour singing about Peace. There was no way I could have known that this would bring me closer to my real mission than I ever could have imagined. This is the true story of an incredible adventure. It begins in the winter of 1994. I was living in a spiritual community dedicated to studying A Course In Miracles - a book that had changed my life. As for me, I do believe in miracles. Perhaps that is why this adventure found me."

Lord make me an instrument of your peace

grant that I may not so much seek

To be understood . . . as to understand,

It is in pardoning, that we are pardoned,

Emissary of Light
My Adventures With the Secret Peacemakers