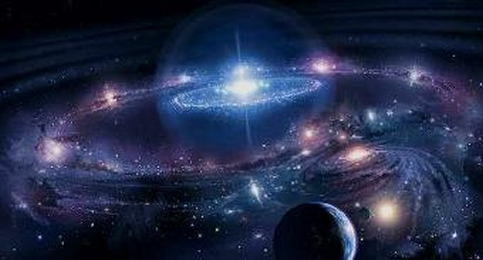 A Solar Logos acts as a Representative of God as Father and Mother. The Solar Logoi for our Solar System are HELIOS and VESTA, along with Their Individualized GOD FLAME. The other six pairs of Solar Logoi associated with Alpha and Omega of our Great Central Sun are: OSIRIS and ISIS, APOLLO and DIANA, KRISHNA and SOPHIA, HERCULES and AMAZON, AUREOLE and AUREA, DAWN and LUZ. There are Great Central Sun Hierarchs above Alpha and Omega. Other Systems of Worlds have still other Solar Logoi.

There are billions upon billions of Sun Centers with their own Solar Logoi. (1)

Beloved Vesta gave the following explanation in 1956 through the Messenger Geraldine Innocente:


". . . Helios and I belonged to a Galaxy much larger than this one in which We presently serve. We were a PLANET in that System and We were number four, just as the Earth is number four in relation to the Sun today.

"The System to which the Earth belongs (your System) came from the Central Sun of Alpha and Omega and has forty-nine Planets with Seven Suns (56)- one hundred less than the System of Elohae and Eloha. Let Me repeat: There is the Central Sun, from which Helios and I came, and beneath it twelve Suns. The fourth Sun down was the Sun to which We belonged and was Alpha and Omega. That sun, in turn, sent out twelve Planets in a horizontal manner and Helios and Myself were the Fourth Planet out from the Sun. This was on the out-breath, the Suns descending and the Planets expanding - the out-breath of the Godhead so far as the creation of this System was concerned. (*)

"We did not dissolve! That is the thing that the student body becomes frightened about - becoming nothing, through the process of absorption. But that is no more true than you, as individuals, can become nothing through being absorbed into your own God Presence when you become Ascended! In this great Causal Body a Sun, whether it is a Sun of Our System or Alpha and Omega, is of tremendous size. In it there are glorious Temples of Light and when the Sun Gods return with their Own Electronic Belt - that is all the Planets and Intelligences and Beings within Them - they just enter into a Sphere set aside in the Electronic Belt around that Sun and remain as intelligent, conscious Beings; even as there are coming into Our Aura the Beings and all the Intelligences of Mercury! They will live within the Mercurian Temples within Our Aura.

"When We went back into the Heart of the Central Sun of Our System with Alpha and Omega, into the Heart of Elohae and Eloha, We had a choice! We could have stayed there and gone into the Cosmic Heights, or We could have remained in the joy of that magnificent Electronic Belt. Alpha and Omega and six other Suns (seven out of the twelve) applied to create a New Galaxy. That is why the Galaxy to which you belong and which We are presently serving as your Sun, is smaller since five of those Suns of the previous System, with their Planets, decided NOT to experiment with becoming Great Central Suns and creating a Universe in Themselves.

"This may seem difficult to understand but everything in this Universe is a succession of experiences. First you are a Planetary Lord, then you have an opportunity to become a Lord of a Sun! When this course is completed, Alpha and Omega presently breathing in, Osiris and Isis, will be the first Sun to return home into the Heart of Alpha and Omega. When all seven of the Suns have returned into Their Hearts, We will then determine what size the next Galaxy will be; that is whether Helios and Myself decide to try and be a Central Sun, or whether We stay within the Heart of Alpha and Omega and work from there.

"Our original Galaxy which had one hundred fifty-six Planets and Suns is a minute Galaxy! There are some that have thousands and thousands, and you would need your late Professor Einstein to explain that!

"Once more let Me repeat: Alpha and Omega, as one of the twelve Suns in that Galaxy, qualified to become a Central Sun. In like manner, the other six Suns, qualified to be Central Suns, in this Cosmic Galaxy, and not twelve. The Suns that now run down in Our present System were in a Horizontal position out from Alpha and Omega when They were a Sun. Beneath Helios and Myself, you have a very strong Sun - Hercules and Amazon. Then you have a more delicate one, Aureole and Aurea; and the last one is Dawn and Luz. This one will be the last to return into the Heart of Alpha and Omega when we have Our Cosmic Council and decide whether We, in turn, with the Planets of our System wish to create a new System.

"Above Us are Krishna and Sophia, with Seven Planets out from Them; the first Planet out being Illumina, the Second Mazda, the Third is known as Bella and the Fourth is Venus.

"In Our System, there is Helios and Myself as the Sun and the First Planet out is Mercury, the Second Aquaria, the Third one is Uranus, below Bella, and the Fourth is the Earth, right below Venus.

"In like manner in the System above Us, Venus will move sideways into the orbit of Bella, then onward to the Planets you see in the chart, (*) and into the Heart of Their Sun, Krishna and Sophia. Venus and the Earth will still be together, Venus above the Earth as now, because They both will move in one space.

"I thank you for as much comprehension, beloved ones, as you have. I want you to have this so you will understand that We are not talking as alarmists, nor are the Great Ones when They ask you for assistance in the changing of the vibratory action of your worlds. . . . " (2)

Ascension Research Center is run and maintained by students of the Ascended Masters, and is not sponsored by any organization.