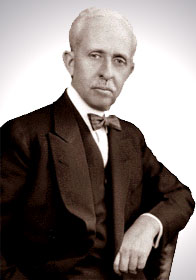 We honor James Cash Penney, Who has Ascended and become One with His Beloved I AM Presence in the Victory of the Ascension. He is now an Ascended Master - a part of the Ascended Host of Light. Mr. Penney was the founder of the J.C. Penney Company, Inc. Mark Prophet, in one of His recorded lectures in 1971 or 1972, announced that J. C. Penney attained His Ascension — in part due to His strong standards of ethics and honesty, which He passed on as foundation principles for His retail stores. He is was considered by many as one of the most prolific retail merchandising geniuses the world has ever seen.

J. C. Penney was born on September 16, 1875 on a small farm outside Hamilton, Missouri. Penney's father was a poor farmer and unsalaried Baptist minister, His mother, a devout woman born of a genteel Southern family. Raised with an abiding faith in God, the foundation of Penney's life was the Christian ethic of the Golden Rule, plus self-reliance, self-discipline, and a concept of personal honor. James Cash Penney climbed His way from humble beginnings to the top of the international retail market by an abiding practice of the name of His first store, The Golden Rule. In 1889 Penney took a small position in a dry goods store of the name The Golden Rule. Penney worked ambitiously and by 1902 He had impressed the owners into granting him a partnership. He opened His first Golden Rule department store on April 14, 1902 in Kemmerer, Wyoming. 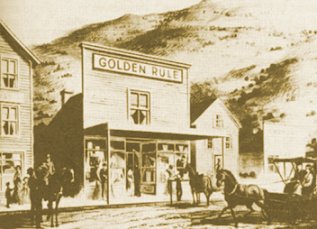 Penney envisioned a chain of stores across the Rockies based on His business philosophies, and the revolutionary idea of charging a flat price to all customers regardless of social status and class. In 1907 the other partners dissolved their interest in the chain, and Penney was quick to seize on the opportunity. With control of the assests of all three Golden Rule stores, Penney began making plans for expansion.

By 1913 Penney had headquartered His operation in Utah, and under Utah law He was required to change the name of His stores. Thus J.C. Penney Company was born. That same year Penney formulated and put forth the Penney Idea outlining the company’s motto as Honor, Confidence, Service and Cooperation. This motto was practiced at all levels in the company, and was to be found in their mission statement and corporate vision. He went public in 1927, giving all His store managers shares and later including all His employees in corporate profit-sharing. By 1971, J.C. Penney had 1660 stores in North America.

The stock market crash of 1929 ended many of Penney's dreams and philanthropic projects. The Christian Herald Magazine eventually took over Penney Farm, but there was no hope for the J. C. Penney Foundation, which He set up to assist religious, scientific and educational projects. Still, during the 1930s and 1940s, Penney continued His involvement in a variety of charitable works and became involved in many civic organizations. To support youth interests in farming, He became a major benefactor of the National 4H Clubs. After rebuilding His fortune in the mid 1950s, Penney established the James C. Penney Foundation in 1954, which remains active today, supporting organizations addressing issues of community renewal, the environment, and world peace.

In 1931, Harper published the first edition of His Autobiography: J. C. Penney: The Man with a Thousand Partners. In 1950, J.C. Penney released the book Fifty Years with the Golden Rule.

Penney was very interested in the deeper spritual values of life, and was a member of the Scottish Rite Masons. He completed His Masonic Resurrection Ritual in Salt Lake City, Utah, on June 2, 1911, and was awarded the rank of 33rd Degree Mason on October 16, 1945.

As He approached His 90th birthday in 1965, JC Penney maintained a full schedule of appointments. He had a phenomenal memory, and, although He met thousands of people in His lifetime, it is said that He never forgot a name or a face. On December 26, 1970, Mr. Penney fell and fractured a hip. After weeks of recuperation, His transition occurred as the result of a heart attack on February 12, 1971 at the age of 95.