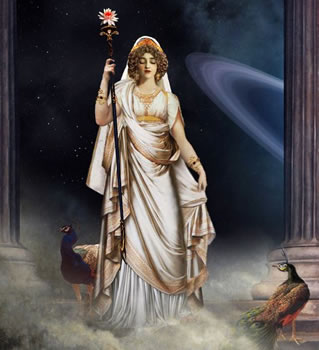 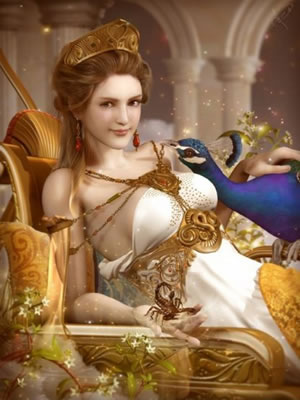 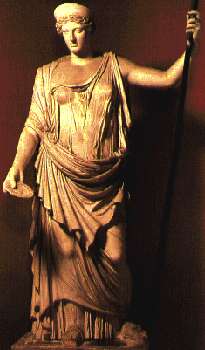 Marble statue of Hera, the wife of Zeus, 5th century BC

She was known as Juno in Roman religious traditions, while Greek religion and philosophy referred to her as Hera. Junos (Hera's) influences were considered to be femininity, love, relationships, romance, kinship, time, protection (women and children) and leadership. As the supreme Goddess of Roman and Greek religious traditions, she offered a helping hand in every aspect of relationships, especially the safety and happiness of women and children. Juno would also take an active role in public life and finances. Artists would depict Juno as always wearing majestic clothing befitting the "Queen of Heaven". 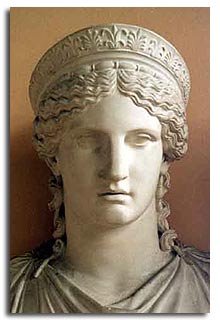 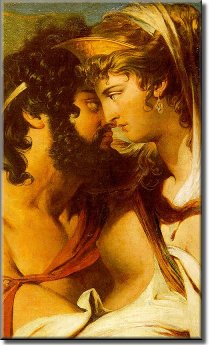 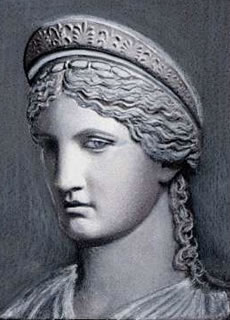 Juno was the Goddess of marriage, pregnancy and childbirth.

She was the Queen of the Gods and part of the Capitoline triad that also included Minerva and Jupiter.

This Goddess was an embodiment of the traditional female roles of wife and mother.

One of her titles was Lucino (meaning Light) as she helped to bring children into the light of this world at birth. She was also said to set and strengthen a child's bones.

She was also Goddess of conception, a Goddess to be called upon in labour and one who helped settle disagreements between spouses.

Juno protected the finances of the Roman people. In this role she was the patron Goddess of the royal mint.

Before she absorbed many of Hera's characteristics several scholars suggest that she was a Maiden Goddess.

The Month of June was named after her and it was considered the most favourable month to get married in.

She appears as an archetypal figure in Shakespeare's play The Tempest. 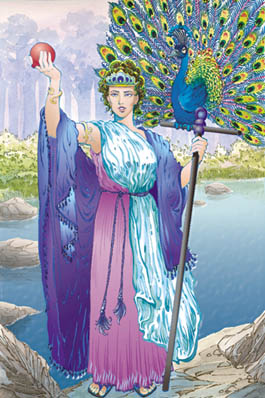 Queen Hera / Juno represented the Regal Feminine, using her benevolent Authority to protect others. She signified the power of women who rule over anything - from the office to the home environment.

Hera is known as the "Queen of the Olympians" and "Queen of Heaven". In art and sculpture, she was depicted as a regal beauty. 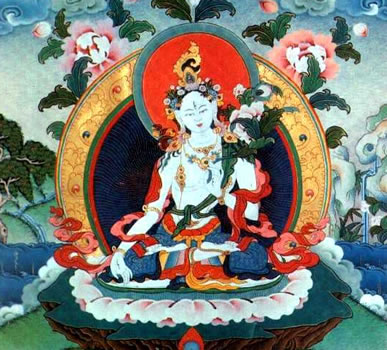 Goddess Tara, a female Buddha and meditational deity, is the most popular Goddess in the Buddhist traditions. She is considered to be the Goddess of Universal Compassion who represents virtuous and enlightened activity.

The word Tara itself is derived from the root 'tri' (to cross), hence the implied meaning:' the one who enables living beings to cross the Ocean of Existence and Suffering'. Her compassion for living beings, her desire to save them from suffering, is said to be even stronger than a mother's love for her children.

The story of Tara's origin, according to the Tara Tantra, recounts that aeons ago she was born as a king's daughter. A spiritual and compassionate princess, she regularly gave offerings and prayers to the ordained monks and nuns. She thus developed great merit, and the monks told her that, because of her spiritual attainments, they would pray that she be reborn as a man and spread Buddhist teachings. She responded that there was no male and no female, that nothing existed in reality, and that she wished to remain in female form to serve other beings until everyone reached enlightenment, hence implying the shortfall in the monk's knowledge in presuming only male preachers for the Buddhist religion. Thus Tara might be considered one of the earliest feminists.

Another legend of Tara is that she was born from the compassionate tears of Avalokiteshvara (The Buddha of Compassion): "Homage! Tara, swift, heroic! With a glance like flashing lightning, born from a blooming lotus sprung from the tears on the face of the Lord of the World!"

The above verse refers to the legend of Tara's origin. Avalokiteshvara was looking down from his heaven on the world of suffering beings, and he wept to see that more and more of them were in pain. From the tears streaming down his face two Taras were born, a peaceful white one from the left and a fierce green one from the right. Tara is thus also often referred to as Avalokiteshvara's consort.

To the Buddhists the symbolism of color is of great import. The sadhanas (ancient manuals laying down procedures for worship) are very particular in stipulating the colors of the deities visualized. This color is intended not only to unfold the nature of the deity represented but also to indicate the functions to be performed by that deity. Specifically colors are used in the paintings under a definite mystic scheme, based on the psychic experiences of the sadhaka (worshipper).

No wonder then that her devotees visualize Tara in a myriad variety of colors:

"Some have a vision of you (Tara) as red as the sun with rays more brilliant and red than the lac and the vermilion. Others see you blue like the sapphire. Some again see you whiter than the milk churned out of the milky ocean. Still others see you golden. Your visva-rupa is like a crystal which changes its color with the change of the things around it." . . . . Arya-Tara-sragdhara-stotra

The most popular of all the known forms of Tara are the widely worshipped Green and White Taras. It is believed that the first artists modeled Green Tara on a young virgin, and the White Tara on a physically mature, voluptuous woman. Thus traditionally whereas the Green Tara is visualized as young girl having a mischievous and playful nature, the White Tara is represented as a mature woman, full-breasted and wise. This tradition survives to the present times.

Green Tara is Tara's most dynamic manifestation. Her color symbolizes youthful vigor and activity. The Buddhist Lord of karma (action), Amoghasiddhi, is also associated with the green color, thus signifying that they belong to the same family. This is a further affirmation of the perception that Green Tara is a Goddess of action.

She is often depicted in a posture of ease with right leg extended, signifying her readiness to spring into action. The left leg is folded in the contemplative position on the lotus pedestal, the two together thus symbolizing the integration of wisdom and art. Her left hand, in the gesture of granting refuge holds the stem of a blue lotus that floats over her left shoulder as a symbol of purity and power. With her right hand she makes the boon-granting gesture.

"On a lotus seat, standing for realization of voidness, (You are) the emerald-colored, one-faced, two-armed Lady In youth's full bloom, right leg out, left drawn in, Showing the union of wisdom and art - homage to you! Like the outstretched branch of the heavenly turquoise tree, Your supple right hand makes the boon-granting gesture, Inviting the wise to a feast of supreme accomplishments, As if to an entertainment-homage to you! Your left hand gives us refuge, showing the Three Jewels; It says, 'You people who see a hundred dangers, Don't be frightened - I shall swiftly save you!' Homage to you! Both hands signal with blue blue utpala flowers, 'Samsaric beings! Cling not to worldly pleasures. Enter the great city of liberation!' Flower-goads prodding us to effort - homage to you!"
. . . . First Dalai Lama (1391-1474). 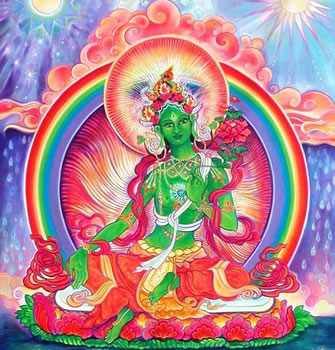 In visual arts she is shown as resembling an exceptionally lovely human being in everything but the color of her skin and the splendor of her ornaments. The slender, long proportioned body of the Goddess is shown dusky olive green in color and her coloring reverberates against the striped cushion of her throne back. The painting technique itself is extremely refined, the pigment flat and thin, and it does not emphasize linear outlining except in the most subtle way. The mysterious and intriguing nature of Green Tara is marvelously captured in the medium of painting by the ingenious blending of the typical iconographical setting with the color scheme.

As for jewelry, beautiful golden, red and green jewels adorn her. Her jewelry includes white bracelets, several necklaces with many pendant gems, and a multi stringed, long jewel chain that sinuously falls around her body and over her right arm.

"In a heavenly mansion shaped by the artist of the gods, Inconceivable celestial wish-granting gems, Most beautiful, wrought into fascinating   ornaments, Fully adorn you-homage to you! Like an emerald mountain clothed in rainbows, Your upper body is draped in heavenly silks, Your lovely supple, slender waist supports A skirt of five bright colors - homage to you!" . . . . .
First Dalai Lama (1391 - 1474).

White Tara is often referred to as the Mother of all the Buddhas. She represents the motherly aspect of compassion. Her white colour indicates purity, but also indicates that she is Truth, complete and undifferentiated.

She has been depicted with a symbolism of seven eyes: the two usual eyes, plus an eye in the centre of her forehead and eyes in each of her hands and feet. These indicate that she sees all suffering and all cries for help in the human world using both ordinary and psychic or extraordinary means of perception. They thus symbolize the vigilance of her compassion.

White Tara has a lovely, young face. Her ornaments are covered in jewels. Her silk robes and scarves are painted in an exceptionally lively manner. Her tight fitting garments are embossed with large, rich floral designs. These filmy garments; bright gauzy silks fluttering from the shoulders and a series of many hued silken skirts - leave the slender torso and smoothly rounded breasts uncovered in the manner of ancient India. The whole effect is so ravishing that she might well arouse the very passion she is frequently invoked to calm, were it not that she inspires the kind of exalted reverence a palace guard might be expected to feel for a young and lovely princess entrusted to his care.

With her right hand she makes the boon granting gesture and her left hand, holding the stem of a white lotus flower between her thumb and fourth finger, is in the protection position. The elaborate lotus flower, held in the left hand is called Utpala. It contains three blooms: the first, with seeds, symbolizes the past Buddha Kashyapa; the second in full flower, symbolizes the present Buddha Shakyamuni; and the third, ready to bloom, symbolizes the future Buddhas Maitreya. This signifies that White Tara is the essence of all the three Buddhas of the past, the present and the future. She sits with both legs raised and crossed in the vajra (diamond) position and regally displays both grace and calm. (5)