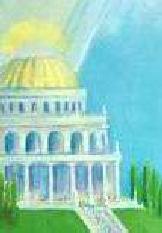 " . . . Now, since Atlantean days no such opportunity has been granted as the second phase revealed below. Therefore, may I present 'the good news' from the blessed eternal Hierarchy with all the Love of My Ascended Heart and My Devotion to the Cause of Goodwill?"

" . . . The pattern for this vast Temple is now being lowered from the blessed Silent Watcher into the etheric realms and the action will be completed by July lst - in time for a celebration of Our Cosmic Declaration of Independence for this blessed Earth from all imposition of tyranny or bondage! That is what we are doing-regardless of human appearances. We are affirming the Freedom of Earth by establishing the first Temple of the Great White Brotherhood known to the outer world since Atlantean days. . . . "

" . . . I AM the 'Key' to Life's Temple of Victory. Therefore all who shall truly desire to visit Our new (presently etheric) Temple - which you shall externalize - may call to your own God Presence 'I AM' asking to be taken to it while your physical body sleeps. As so many of the Sons of Heaven, together with the Angelic Host, are presently engaged in lovingly 'inspecting' and consecrating its sacred halls and rejoicing in its Divine Beauty, I AM sure you shall too! The Temple was first opened to mankind July lst and will remain open until further notice, perhaps even permanently - after all, it is Our Gift to you in answer to your many calls. . . . "

" . . . Surely if temporal government can demand of mankind the material substance to 'arm the Earth' with instruments of destruction, the lovers of peace and freedom - who are multitudinous in every land - will respond to the great privilege of 'laying many stones' in this outer Temple designed in such lofty Spiritual Grandeur at Inner Levels! When it is complete I AM planning on giving My greatest Gift to America and the world, for therein I AM going to actually anchor the full Focus of My Freedom Flame! Do you see now why I have labored so long for America's Freedom so that the whole world may kindle its own Fires of Freedom on America's Forch, that from the great heart of its people Grace may flow to all the family of nations - for all are the Lord's and the fullness thereof.

"The first floor of the Temple (and there are three above the earth level) is Victory's Temple. It is the largest, and is completely circular, surrounded by huge Corinthian columns on the outside and granite artwork as lovely as the Taj Mahal itself, all within the beauty of its towering columns. Around the circular amphitheater will be glorious paintings of the great Chohans Themselves and also including beloved Jesus and Mary, the Archangels and many Others of the familiar Members of the Ascended Host. Services here will be open to all mankind without restriction as to creed or race in keeping with the traditions of the Brotherhood.

"The second floor is dedicated to the 'Holy Spirit' and as such is an 'upper room' vast though it may be, dedicated to the magnificent LORD the Maha Chohan. Here the most sacred rituals shall be performed, including those which are calculated to represent the 'ceremonial action' of this age over which I now preside. The anchoring of the 'Freedom flame' here is a Gift of Divine Wisdom! A huge Focus of 'a snow-white dove' will also be anchored in this Temple within which the Masters of Light shall precipitate several Sacred Tokens and 'Foci' of the Sacred Fire to assist in amplifying the action of the Holy Spirit within the lives of mankind - and especially those who study the Laws of the Sacred Fire and sincerely seek to apply themselves to the unfolding of that Flame of God Life within the chalice of their own Sacred Heart!

"The third floor is closed to all except the most advanced chelas and is under the direction of the great Ascended Master Serapis, whose stricter disciplines lead to the Freedom of the Ascension! It is circular, too, but smaller than the other temples. We expect to permit here the use of an Ascension Chair - located directly above the Freedom Flame Focus on the second floor which is, in turn, above Victory's Altar on the first floor! This Temple is strictly dedicated to the Ascension and is for the use of those nearing that achievement. In this Temple we will actually step through the 'veil' in Our Tangible Bodies and assist in completing the earthly Victory of our most faithful chelas as we did in the Cave of Symbols and other Sacred Retreats. Thus this circular 'pyramid' of Victory honors the Name of God by a means whereby the various 'stages of evolution' may come into a practical focus which will not be too sharply delineated so as to separate men from one another, except to inspire them and elevate them by world-renowned beauty and the Vibratory Action of the great Brotherhood Itself, as It now moves once again into fiery world action in the outer visible unconcealed realm!

"Further descriptions may be given from time to time, but We are not presently so concerned with the form as with the Gift of the Temple. Its approval is God's Gift from Our Realm of Light. Its creation, then, is a Cosmic Gift externalized by the acceptance of mankind. We will assist in its externalization from time to time but the Law requires that you balance Our Gift by serving the Law of your Being, and calling forth your own God Perfection while doing also as We do and assisting all life to find their own Victory! . . . "