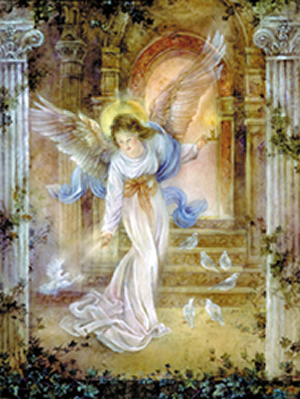 " . . . Some of you have desired to know the difference between the Seraphim, the Cherubim and the Angelic Host. Cherubim are primarily Beings Who plunge deep into the Electronic Belt around the Sun to which They belong, saturate Themselves with the Virtues of that Sun God and Goddess and bring that feeling and Virtue to the Earth. They learn, even as you do, through experimentation, how to hold the Virtue and radiate it out to bless those to whom they are sent. There are little Cherubim - who dissipate that Virtue in the strong impact of unbelief and rebellion but who grow - until they can hold within their Auras the blessing they have been sent to radiate and remain untouched by the energies of less developed lifestreams. The great Cherubim Who guard world movements, such as Cherubim Lovelee, (3) are Those Who have so developed and earned the opportunity of enfolding peoples all over the Planet in Their Radiation of Grace. . . ."

" . . . The Seraphim are glorious Beings Who usually form the Court - the Honor Guard - of Beings Who travel through the Cosmos. Always when such Beings. make a visitation, you will see the Presence of the delicate, graceful Seraphim preceding the Cosmic Being, Master or other Divine Guest. They, too, are a Radiating Center of Divine Love and Protection, but, for the most part, Their Service is One of Ministration to the Divine Messengers. . . . "

"The Angelic Host (as a whole) form the 'Spiritual Court' of such Beings . . . and carry the Gifts of the Being into the atmosphere of Earth, when directed, to bless and uplift whomsoever chooses to accept that Gift and Their Reality. . . . "

"Your beautiful Cherubim have enjoyed much Their visit to Helios and Vesta, to Alpha and Omega, to Their own Divine Complements, and to the Realm in which they naturally abide. In all this Glorious Freedom They have absorbed (because that is Their Nature) the Feelings of the Sun Gods and Goddesses, the Other Divine Ones Whom They visited, and the crystal clear atmosphere, in which there is no distress, in which They have abided for this short time. Every One is eager (a most unusual activity) to return into your auras with Their Christmas Gifts of renewed Faith and the various Qualities of which you personally are cognizant.

"The beloved Archangel Michael will escort Them back on the Cosmic Highway created on Transmission evening, and each one of Them bring to you a Gift of Radiation. Stop a moment and feel it. Ask your Holy Christ Self to allow your minds to accept and your feeling worlds to know They are here. Association with Them has kept you upon the Spiritual Path thus far - further association with Them will raise you to a point where you can truly not only feel but actually see (with the inner sight first) and the physical sight later, the Company which you keep.

"Your auras (composed of the emotional, mental, etheric and physical emanations from your soul and outer mind) are more or less unprotected from the world in which you live. You have not yet learned the value nor accepted the power that there is in the Tube of Light in which We live, move and have our Being. Thus you are more prone to accept into those auras the distress of the world than the Glory of your own I AM Presence, the Divine Ones and even your Cherubim. Gradually, however, you will learn that the energy directed from the Immortal Threefold Flame within your hearts can be controlled and change the quality of energy in the world around you. To this end the Cherubim, like the Spiritual Hierarchy, have 'foresworn nirvana' to help you. Thus can mankind know the value and practical benefit of association between Angels and men.

"This is the law of control of energy and vibration. Now, this control cannot come from will power and be sustained, although the will to do is the first step in such association. It can come as the understanding of the chelas is increased, their faith strengthened, their acceptance increased and the Christ within given opportunity to burst through the hard shell of the soul. Then you will be able to not only magnetize the Rays from your Spiritual Partners but also be able to radiate those Rays more powerfully than all the accumulation of discordantly qualified energy with which you might find yourselves surrounded.

"What think you of the blessings to your homes, your families, your businesses, your associations, when a Cherubim actually lives within your Aura? Ah, children you know not yet what Their Radiation does for all who touch the compass of your individual and collective worlds. I AM real. I AM your Friend. Often when your Cherubim has a difficult time, I hold such an One in My Own Arms and create the atmosphere of the Kingdom for Him or Her and then They are able to continue in Their Service. I guard and guide your group activities. I invite and sometimes plead, for certain Beings Who come to Bless you. I direct your individual endeavors of a spiritual, as well as a secular nature, into the Paths of Righteousness. When an individual leaves your group and returns Home "to go out no more" that Cherubim returns with such an One and often forms the first of the Spiritual Court of the Ascended One. There is truly a great comradeship in such an association.

"Your Cherubim, all grown now to about sixteen year old youths, by your Earthly count of age, return in golden robes, banded at the hem and sleeve cuff by the royal blue sapphire bands - indicative of the service of the Temple that pulsates above the City of Brotherly Love. Accept Them, take time when you return home tonight to really feel them . . . Love Them.

"Thank Them. You will receive the Response in an uplift of your own feelings. This I promise you.

"Many among you have asked that I speak with you. It is not often that the Cherubic Kingdom renders this Service. They are primarily Radiating Centers of Virtue.

"My Aura is elastic, so to speak, in your terminology (forgive Me but I have not used "human phrases for so long it is difficult to "word" My thoughts and feelings to you in a manner that is comprehensible to the outer mind.) However, I abide always over your Sanctuary, and your City, and usually in garments of gold and blue).

"I AM awaiting your call. To you, who served with Me on Atlantis, at Inner Levels thru the ages, and now again, I say thank you and God Bless you."

Bulletin Volume 5, Number 41 (The Bridge to Freedom: 1956) This Address was given by Beloved Adelphia to the students at the Royal Teton, and released to the public through Geraldine Innocente Luk, A.D.K.   The Law of Life: Book II, (Pueblo, Colorado: A.D.K. Luk Publications, 1989) The service of Lovelee, in the present civilization, can be compared to that of Angel Micah during the Jewish Dispensation under Moses. ("Bridge", March, 1957, p. 2)