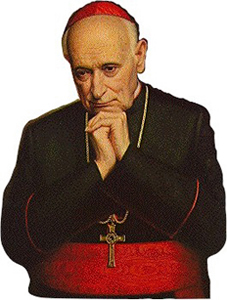 Joseph Mindszenty was born in Mindszent, Hungary, in 1892. He was ordained a priest in 1915 and a bishop in 1944. Raised to the Primacy of Hungary in 1945, He was elevated to Cardinal the following year. He was arrested in 1948 by the communist regime and imprisoned in 1949. During several days of freedom given to Him in 1956, He sought refuge in the U.S. Embassy in Budapest, where He remained until 1971, when He was permitted to leave the country. With His transition in Vienna, Austria on May 6, 1975, Cardinal Mindszenty became an Ascended Master and a part of the Ascended Host of Light. 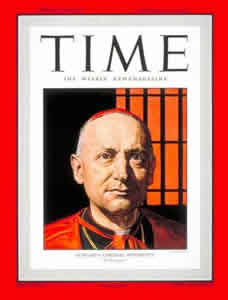 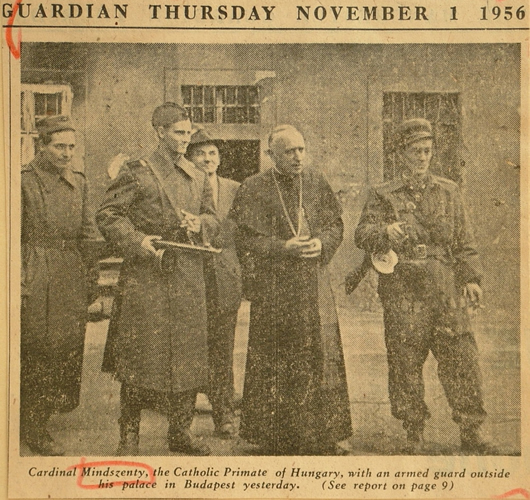 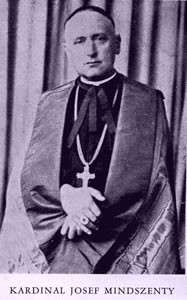 During the German occupation of Hungary in WWII, József Mindszenty was bishop of Veszprém. The bishop's patriotism, his never changing attitude to serve God, his church and the Hungarian people put him in direct conflict with the occupying forces and the day's government. He served several months in prison.

In 1945 he became archbishop of Esztergom and Catholic Primate of Hungary. In 1946 he was made Cardinal.

The ruling communists embarked on confiscating the Catholic Church's - and other Churches' as well - lands, schools, most high schools and other properties. They started with the land confiscation in 1945, and the schools in 1948.

Before József Cardinal Mindszenty's trial all schools and most high schools were confiscated. The ultimate goal was to suppress all religious activity completely and to eradicate the Churches within a foreseeable future by administrative measures and intimidation. They sought to keep the young away from the Churches and from religious instruction and activity. Teachers were forbidden to attend church services.

At a sensational public trial, József Cardinal Mindszenty - in complete surprise to everyone - pleaded guilty to most charges. Everybody suspected that the Cardinal was either drugged or tortured to plead guilty.

At last the much loved, respected and revered Cardinal of Hungary was free. Ever so briefly. After 4 November 1956, when the invading Soviets brutally crushed the popular uprising, József Cardinal Mindszenty took refuge in the U.S. legation in Budapest.

The following years, the fact that he did not leave the country caused serious problems for the Communists. Under constant pressure from the communist government, József Cardinal Mindszenty refused to leave Hungary unless the Hungarian government rescinded his conviction and sentence.

In 1964, the Hungarian state and the Vatican signed a concordat, which most of the laity resented. In effect, it covered only the appointment of bishops to fill vacancies with the addition that the state had the right to veto any appointee. In response to the Church's unwillingness to compromise, the state, as usual, took massive legal action against Catholic priests and laity in 1965. The last of the big trials took place in 1971-1972, as part of the effort to influence the Pope to persuade Cardinal Mindszenty to resign from his position as Archbishop of Esztergom-the seat of the head of the Hungarian Catholic Church. Usually priests and laymen who played an active role in Catholic communities and organised youth groups were indicted. The charge was serious: generally, they were prosecuted for conspiracy against the state. In 1971, after an agreement between the Vatican and the Hungarian government, József Cardinal Mindszenty left Hungary for the Vatican on September 29, 1971.

The Pope received him with great honour and assured him: "You are and remain Archbishop of Esztergom and primate of Hungary. Continue working, and if you have difficulties, always turn trustfully to us."

Later József Cardinal Mindszenty set up office in Vienna. József Cardinal Mindszenty asked the Holy See to make it possible for him to care for Hungarian Catholics in foreign countries and to appoint suffragan bishops for them. His requests were not granted. After settling in Vienna, Cardinal Mindszenty had to endure another humiliation when, on February 5, 1974, in an effort to improve church relations with Hungary, Pope Paul VI removed him as primate of Hungary and announced his removal from the See of Esztergom. (It was here that Prince Géza established the royal seat. Subsequently his son Stephen chose it as the site of Hungary's first cathedral. His coronation by a papal envoy on Christmas Day 1000 AD signified the country's recognition by Christendom.

In 1991, the hill was the setting for two events symbolising the Church's triumph over Communism: the reburial of the exiled Cardinal Mindszenty and the first papal visit to Hungary. József Cardinal Mindszenty's office announced: the Cardinal has not abdicated his office as Archbishop nor his dignity as primate of Hungary. The decision was taken by the Holy See alone.

The first issue Kontinent printed three pictures on the cover with three quotations. The pictures are those of Alexander Solzhenitsyn, Milovan Djilas, and József Cardinal Mindszenty. The following quotation accompanies the Cardinal's picture: "The Church does not ask to be defended by secular powers because its refuge is under the wings of God. The picture over the altar in the church of Papa represents the stoning of St. Stephen. I pointed to this picture and appealed to the Hungarians not to stone each other, but imitate the virtue of this protomartyr of the Holy Church."