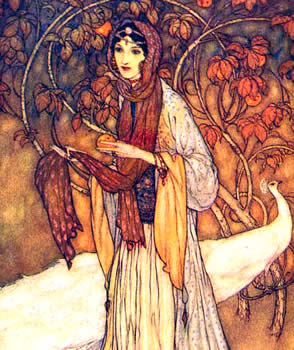 from The Magic Presence

Guy Ballard: "We had a delightful trip on the deep blue waters of the Mediterranean, and finally docked at Alexandria. Leto again led the way to waiting autos, and after driving for about twenty minutes, we entered a walled enclosure; and stopped before a beautiful home built in the Moorish type of architecture. A youth in Arabian dress admitted us, and led the way to a circular room. A tall, beautiful woman, who looked not more than twenty, yet whose eyes held deep Wisdom, came forward and greeted us graciously. Leto presented her as Electra.

"'Beloved Sisters and Brothers,' She said, 'I have been expecting you, and you are most welcome. Please accept my humble hospitality, now and at any time, that you are in Alexandria. You will honor Me to make this your home. Your Beloved Master was here yesterday, and asked that you remain for two days. At the end of that time, a boat will take you to a place on the coast of Arabia, from which you will drive to your destination.' She then touched a set of exquisite chimes, the youth returned, and showed us to our separate suites.

"During our conversation at dinner, we learned something of Electra's family. Her father was an Englishman, and her mother was a French woman. Some one asked how long it had been since they had passed on, and She replied:

"'One hundred and twenty-five years ago. You see,' She continued, 'I am not as far advanced as your Wonderful Escort, but I have attained enough Dominion to eliminate time and space'

"'Electra,' said Leto, 'is far advanced, and is doing beautiful work, as you will see later. While we are in Alexandria, you shall see the places of interest, and we shall spend the next two days enjoying ourselves.'"' (3)

"Stand for the Victory of the Light!"

"As We see you releasing that Mighty Charged Power of Light and Energy, We know all that means to you in gaining the Power through momentum for your Complete Freedom. You are not fully aware of this yet, but We can rejoice even before you are aware of all that it means to you.

"Being invited to speak to you, tonight, I consider a very great privilege. When those beloved Children came to Me on their way to Freedom, I felt like a mother to them. I longed to keep them in My Home for some time. Remember, We who serve certain capacities, many times are called upon to serve alone, and such has been My Capacity of serving. Ere long, I shall be released from that particular part of My Service and join with the Great Ones in the service to America and the world. (Applause)

"Thank you. You are very gracious, and I feel your kindness and Love enfolding Me. May you feel My Great Enfolding Love in return, and form Its Mantle of Light about you and join to that the Force of Invincible Protection for you everywhere you move. May I be some part in strengthening your call, strengthening your determination to have the Perfection of Life flow into your world of action, like a Mighty River, until not one thing that is a Blessing and the Perfection of Life will be withheld. Thank you so much. . . .

". . . Please see your part in this, in the Mighty Decrees that you have released into the mental and feeling world, cleansing and purifying it; because your call remember, sets into action the Power of your Presence, which is the Power of Light, Energy and Wisdom. Then, as that is called forth from the Source of Almighty Light and Energy to your Earth, that Assistance becomes those Great Waves of Cosmic Light as It sweeps through the atmosphere of your Earth and over the surface of your Earth. Remember, beloved ones, that in the Action of the Source of all Intelligence, Light and Energy to this Earth, when the consciousness of mankind has been raised to a certain point, more and more instantaneous becomes the Action of Light.

"In the release of this Great Energy from the Great Source of Light to the Earth, that is the Commanding Presence of Life! May I just touch tonight, and remind you again of the Great Command? Oh, one day, when you know that Great Command, how magnificent! Then will you know the end from the beginning! Then, from the conception of a desire of Perfection, you will know its completeness! Then will you know that in the appearance of the problem before you is the answer.

". . . I have noticed tonight, in your response here, how powerful your feeling is following your attention. Oh, it means so much, beloved ones; because WHEN THE FEELING FULLY FOLLOWS THE ATTENTION, THE ACTION IS INSTANTANEOUS. That is why the Great Ones, in calling your attention to this more recently, have asked you to compel your feelings to follow your attention; and it will bring more quickly the limitless conviction within you of the instantaneous answer to your call. That is what you are entering into and what is needed now, in bringing the Light to govern the wave of fear and depression that has passed over your America, to try to bring domination over your financial requirements.

"Do not yield to this, beloved students! That is a consciously projected activity! There is no reality back of it. Perhaps it might be just a little out of order for me to say this to you in America, but anyhow I shall take the chance. Do you know that in your America, there are a great many people who are not of the Light and who have learned something of mental power; but the politicians of your America, have sought out certain forces in order to wield mental power, to govern and gain their political ends. . . .

". . . Let us see Our Power is the Power of Light, to send forth into the mental and feeling world, this Mighty Directing Intelligence and Energy; to act within the feeling world of your government, in your politicians and change their desire into a constructive purpose, instead of one of selfishness.

"Remember, that in these Mighty Charges of Light going forth into the mental and feeling world of mankind, there is no resistance; because It is the call to Life. The Life of whoever that current touches wants Perfection! Therefore, all give response through the Power of the Light within their Hearts. See then, how definite is your action in the call to Life, to feel and have instantaneous response.

"I wish you to see this tonight as firmly as possible, for then you will not fear what politicians or what the conditions are in your government, or what those in your city might do; but in the call for Divine Order and Divine Justice going forth into the mental and feeling world of mankind, charging, charging, charging One Mighty Impulse after another; then will you see the Dominion of the Light; because that Light knows no resistance through any human being or all put together.

"That is why, tonight, in the Full Power of that Mighty Conviction which is charged into your world, realize your call to Light is the Infinite Power and Glory of that Light, sweeping through the atmosphere of your Earth and into the feeling world of mankind, blessing them as nothing in the world can do; and ofttimes bringing the Light and charging the desire world of the individual, with that constructive purpose, which had a few moments before, been charged with the most destructive activity.

"Therefore, you are rendering a service to Life, to America, to mankind and to yourselves that is inconceivable to the one yet unascended. Therefore, let Us help you in Our Humble Explanation, to more fully realize your Power in your call to Light. In the great body of students throughout America, in their call to Light, all comes into One Great Focus, through the mental and feeling world, of the Power of the Energy released which will bring Its Dominion.

"Doubt not, beloved ones, that Dominion of the Light is bound to come in your continuous call; for daily and hourly are you gaining that Momentum and Power which is little realized yet in your physical activity, but in the mental and feeling world, you are becoming a Power. . . . Oh beloved ones, be encouraged! Be dauntless before this human sense of limitation and stand for the Victory of the Light!