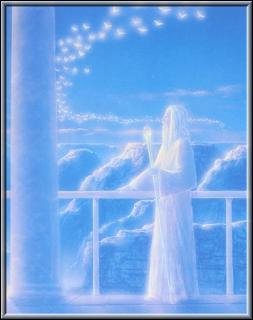 "If one deliberately takes the life of another human being or determines mentally to take it he has set a cause into motion that will surely take his own. A feeling or desire for the death of another person will do the same thing for it goes forth to the person, and then begins its return journey to the one who sent it out. Many times individuals allow resentment against injustice to flash forth, with an intense feeling to rid the world of a certain individual. This is a subtle form of the thought of death and to the one who sends it out it must return.

"Many, many people bring about their own dissolution by this very subtle activity of the human self for no one ever escapes this "Immutable Law." There are many phases of Its reaction and it is because humanity indulges in such thoughts and feelings that the race as a whole has been experiencing the dissolution of body after body.

"The number of mankind that pass out through physical violence is infinitesimal compared to the deaths brought about by these subtle activities of thought, feeling, and the spoken word. The human race has been killing itself off for thousands of years in this subtle way because it will not learn The Law of Life and obey It.

"There is only One Law of Life, and that is "Love." The Self-Conscious, thinking individual who will not or does not obey that Eternal Beneficent Decree cannot and will not retain the physical body because all that is not Love dissolves form and it matters not whether it be thought, word, feeling or deed intentional or unintentional the 'Law' acts regardless. Thoughts, feelings, words, and deeds are each but so much force acting and eternally move in an orbit of their own.

"If man knew he never ceases creating even for an instant he would realize, through the Presence of God within himself he could purify his miscreations and thus be free from his own limitations.

"He spins a cocoon of human discord around himself and goes to sleep within it forgetting at least for a time, that if he can build it, he can also break through. By using the Wings of his Soul Adoration and Determination he can break through his self-created darkness. Then, he lives once more at the Center of his Being in the Light and Freedom of his God-Self.

"However, in the activity of you and your beloved family, or shall I say my beloved family, the cloud that has seemed to hold so much of sorrow is now turned inside out and reveals its glorious golden lining. You have now come within the Radiant Splendor of the "Light" from which you will never again recede.

"In most cases, if human beings knew the wonderful things that are sometimes planned for them, they would unknowingly prevent the approach of this greater good. You have been invited here, not only to join your loved ones, but to receive definite instruction concerning the existence, use, and direction of the Mighty God-Power latent within you. When you understand how to release and control It, anything will be possible for you.

"Your loved ones used the Light and Sound Rays in communicating with you. This knowledge with its power will be explained, and you too shall be enabled to operate them consciously and at will. You feel deeply, and when that characteristic is consciously governed, there will come an Awareness of the Mighty God-Power that stands ready to be released at any instant.

"You are to remain here for six weeks of training, and then return to the outer world to use the understanding you have received. Come again, at any time for you are now one of us.

"I can never put in words what those six weeks meant to me. To become aware of my own ability to use the instruction and application of such wisdom astonished me. Soon, I began to gain a confidence in myself that made everything much easier. What seems so mysterious and unusual to the human I found natural and normal to this Stupendous 'Inner-Presence.'

"I had to realize that I was Truly the Son of God. As a Son of the Source of all Good the Limitless Wisdom-Energy obeyed my conscious direction, and when I directed it as does a Master produced results instantly. As I gained confidence in my own ability to use the 'Great Law,' the fulfillment naturally became more and more rapid. I marvel yet at the Ever-pouring Fountain of Love and Wisdom that streamed forth from this Great Master. We love him with a deep devotion greater than any love that could ever exist between parent and child for the Love Tie formed by the giving of Spiritual Understanding is Eternal, and far deeper than any love generated through human experience no matter how beautiful and strong it may be. He often said to us:

"If you will make yourselves an Eternal Fountain of Divine Love pouring it forth into every place your thought goes, you will become such a Magnet for All Good that you will have to call for help to dispense it. Peace and Calmness of Soul release a power which compels obedience of the outer mind. This must be claimed with authority. Our home here in this Secret Valley has been used for over four thousand years."

The Voice of The I AM     Beloved Ascended Master Eriel