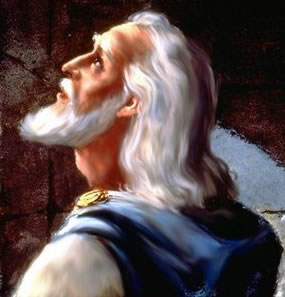 "Good evening, sons and daughters of God. It gives Me good pleasure to address you after long centuries of being apart from this evolution. Now from the Ascended State I speak to you out of the Love Fount of My Heart.

"I come, then, to tell you of the lessons learned  lessons that I have learned, lessons that the Suernis have learned and lessons that you have learned. Of the two million who came with the Lord Christ to the land of Suern, who were his adherents and had considerable development of the Christ embodied within them, the one million who [eventually] Ascended were in a state of higher Love and higher Grace. It was by their love for the living Christ and the Source whence he had come that they Ascended from that land.

"The one million who did not Ascend, though they had Christ-attainment, did not have the sufficiency of Love to sustain that level of devotion that would allow them to merit the Ascension. And so the residue of their karma held them back and eventually did overtake them as they did multiply the negative momentums and did gradually let go of the positive momentums. Thus, increment by increment the Sacred Fire fell, almost unnoticeably yet precipitously. These individuals have come to be known as the lost sheep of the house of Israel. (3) Thus, when Jesus came two thousand years ago he declared, 'I am not sent but unto the lost sheep of the house of Israel. (4)

"He came to call to repentance and to call to the path of the Divine Mother these [remaining] one million souls. Most of them are still embodied upon Earth today, often in positions of leadership. They retain as a shadow the vestige of the former self and former Christ Light, yet even that shadow of their former days of glory does place them above their peers in many fields. . . .

". . . . Now understand, beloved, that I sought with all of my Heart to bring the ancient Suernis into a love and a devotion of the Divine Mother. For it is the Divine Mother who gives the attainment and the mastery and the raising up of her Light whereby the individual may have mastery over himself, his circumstances and the elements, may command the forces and the elementals. Beloved ones, this experiment was such a disaster that not since then has a high adept ever been empowered in a position of rulership to compel adherence to the moral code of the conserving of the Sacred Fire. . . . "

"To this day, then, the option for self-mastery [is left to the] freewill decision of everyone upon earth. The decision of how to spend the Light of the crystal cord descending from the I AM Presence and the Light of the Divine Mother rising upon the spinal altar remains the province of every individual in the privacy of his personal counsel with God.

"That is not to say, however, that the individual who does choose to continue to squander that Light in lasciviousness and all manner of lust is free of the karma of so doing, for the Light belongs to God: it is the descending Light of Alpha and the rising Light of Omega.

"Thus, the path of adeptship is open to all. As you have been counseled to seek power and empowerment for the healing of the nations and for the saving of these cycles [of opportunity] in the last days of the age of Pisces, so I counsel you that the raising up of this Light by pure love and devotion to the Trinity and the Divine Mother will give you that power which you so desire.

"The question is: Will you desire that power enough to allow yourself to be weaned from its misuses and the scattering and the diminishment of your forces?

"So, beloved, this is the question that is upon you. Those who love much and are much loved, of them much is expected and they expect much of themselves. And because their love of Jesus is so great, they are able to wield the power of the sacred fire and through mantra and meditation to arrive at the place where their chakras are always filled, their lamps are trimmed, and they have the wherewithal to transfer a Light to those in whom the fire has gone out.

"With what Light, then, shall the fire be rekindled in those who have let it go out? May it be with your Light but may [its transfer] be always by the permission and under the jurisdiction of Jesus Christ. The oil of your lamps is a sacred gift and it must be given [only] to those who are worthy and committed in its use, else you will find yourself running out of your own Light by distributing it without discrimination.

"My desire, then, was so very great, and I did learn the lessons of too much love and how too much love for the child, in giving so much, does spoil the child. And therefore this evolution of Suernis who were under me have remained in that state of being spoiled and self-indulgent and have, many of them, remained stubborn and stiff-necked [children] to the present.

"Though they were under the guru Moses, though they were under Abraham and the patriarchs, though they have had many opportunities  visited by the Archangels and by servants of God who have dotted the centuries as the Sons of the Solitude come again and again  yet in this day, still in rebellion against those ancient days of my love, they insist upon the misuse of the Sacred Fire as a continued defiance of me personally!

"They have never forgotten or forgiven me in my attempt to convince them to restrain their uses of the sacred fire, whereby they might be empowered not only to command the energies for the conveniences of life but, of course, to enter into a path that would bring them ultimate reunion with God.

"Thus, they have denied that reunion and used what powers remain with them of that ancient time as a shadow of a former self to sustain a civilization of materialism and to ensconce themselves [in positions of power], protected now not by the Sacred Fire or their Adeptship but by money itself. Thus, money has become their god and they have used that money as power to control peoples and nations and economies and banking houses. Understand, beloved, just how great can be the resentment of a people [toward their God].

"Now, therefore, I come to you to ask your assistance. For I desire, of course, once again to woo the reincarnated Suernis to a path of Love, to an inner awakening; for many of them, though they yet carry their anger, suffer from depression.

"It is a deep depression, for they know at unconscious levels of being that in my person and in the persons of other Sons of the Solitude they have lost the truest friend they ever had. They know that they do not have that tie to the living Christ and yet they do not desire to surrender their substance, to bend the knee, to confess that they have espoused the golden-calf consciousness and civilization, and to leave all this behind them for the love of the mighty one of God, the Lord Christ.

"Thus, it is an hour when you see a karma repeated again and again. The cycles of opportunity [to overcome the] repetition of this karma are coming to a close for the Suernis. When I speak of the Suernis, I am not speaking of the one million souls who yet have the option to take that ascension but of the rebellious ones who embodied through them as the Suernis who rebelled against me.

"Thus, understand that that rebellious generation must know that their time is short, ultimately, to receive their God. They shall not have to deal with me, for God has withdrawn me from their scene. I, having done all I could do, see that I am but a stone of stumbling in their path. Thus, it has been given to them to know other [Sons of the Solitude] even today. . . . . "

" . . . . Adeptship today, then, is by free will. Alas, the Path is not prominent in the West. Many have never heard of such a path or, if they have, fear it as something that they would call occult. As you know, occult simply means hidden, that which is the hidden wisdom that is unveiled to the initiate.

"But there is a path, beloved, and it is under the Ascended Masters. And since my Ascension I have been able to work with many who have lovingly received my ministration and who have desired the techniques of full God-Mastery for one reason and one alone: the purest love of God and the desire to help his own. Thus, I have graduated to the place of being able to work with those who are certainly suffused with the Love of Christ and therefore can make rapid and light strides on this path of progress. . . . " 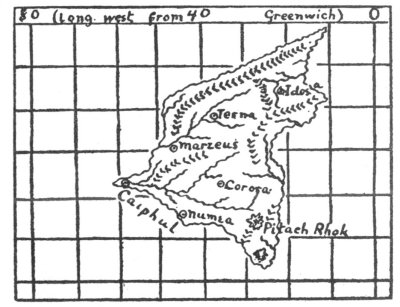 Map of Atlantis from Dweller on Two Planets

Phylos the Tibetan, A Dweller on Two Planets or The Dividing of the Way, 1905 (Reprinted Cosimo Classics, 2007) click here to order Ascended Master Ascended Master Ernon Rai of Suern, October 13, 1991 Pearls of Wisdom®, Vol. 34 No. 61 (The Summit Lighthouse, 1991) Copyright © 1991 Church Universal and Triumphant, Inc. "Lost sheep of the house of Israel" - When Jesus left his Golden Age civilization on Atlantis 34,500 years ago, two million souls followed him. They went to Suern, present-day India. One million of these souls Ascended from Suern. The other million continued to reincarnate, some among the Suernis and some on Atlantis in the realm of the Poseid. Thirteen thousand years ago, the Suernis rebelled against their ruler, Rai Ernon. Those of the one million who were incarnated in Suern did not rebel. However, they too were subject to the doom the Rai pronounced upon the Suernis: to dwindle and wait for ninety centuries and suffer until the time of Moses. He told the Suernis that at that time they would be called the seed of Abraham, the twelve tribes of Israel. (See Pearl no. 60.) The one million who had been with Jesus on Atlantis reincarnated in the tribe of Joseph through his sons, Ephraim and Manasseh, whom Jacob blessed as his own. The tribe of Joseph was one of the ten tribes of the Northern Kingdom of Israel. Today, these one million are reincarnated principally among the peoples of the British Isles, the United States and Canada. The Suernis reincarnated in the remaining nine of the ten tribes of the Northern Kingdom of Israel and in the two tribes of the Southern Kingdom of Judah. Today, those nine tribes of the Northern Kingdom are generally reincarnated among the European nations as Christians, whereas the two tribes of the Southern Kingdom (Judah and Benjamin) and some Levites are generally reincarnated among the modern-day Jews. For reasons of karma, the seed of Abraham have also reincarnated in every nation. Matthew 15:24 "Saints robed in white" see: Book of Revelation 3:4, 5; 4:4; 6:9-11; 7:9, 13, 14; 15:6; 19:14.