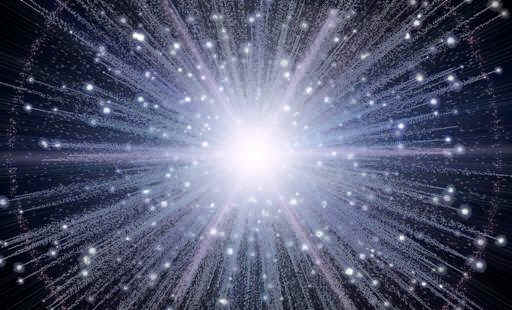 "This is the Dispensation of the Word sent forth, the Word that arcs from the Light of Alpha, from the Heart of Omega, unto the Heart uplifted for a Cosmic Purpose. I bow before the God within you. I AM a servant of the Most High. I adore Him wherever He has enshrined a portion of Himself in the vastness of the Cosmos. I bow before the Lord of Creation in the bird of springtime, in the blade of grass, in the child, in the chela, in the humble of every System of Worlds.

"I step forth from out the Great Central Sun to focalize on this occasion of My coming the counterpoint forcefield of an Energy Center that is within the Central Sun. It is the counterpoint of Omega. Therefore I come on a mission for the Mother. I come in devotion of the Eternal Light of Omega — the One, the Beautiful, the Light. The Almighty One has pronounced that that certain Forcefield shall be sustained and maintained by the Light which I carry. And the Light which I AM — that is the Light of God — is always dedicated to the Intensification of that Light that is called Maximus. This Name that I bear as the Banner of a Son of God may be used then as a noun or as a verb.

"I come then to Maximus. I come then, as you would say, to Maximize the effort, the Concentration, the Light. I come then, O sacred ones, to sustain a certain Focus of the Great Central Sun Magnet. This Forcefield will be for the eventual Ascension and return of this sector of the Matter cosmos unto the white fire core of Alpha. It is, as it were, the placing of the dot, the marking of the spotthat focal point from which these several worlds will ascend one day. And that one day, as a distance of time and space, need not concern you, for it is beyond your comprehension.

"Nevertheless since in this age we have one in incarnation in Terra who can receive Our Light, it was determined by Cosmic Councils that this transfer of Light should be announced and recorded and written in the annals of Terra that some who hear, that some who read, that some who discern Life might also have the opportunity to Accelerate Consciousness by the knowledge of the very Presence of the Energy Field.

"You may also call that Energy Field 'Maximus'; for you see, the word has many connotations, and it is a point for the centering of consciousness on a certain Light of Mother  the MA of a cosmos and the I of individualization, and again the confirmation of Mother within the US of the Elohim, of Twin Flames, and of Alpha and Omega. And the mighty X-factor in the center of the word is the nexus of the turning of the cycles for the integration of the Flow of the Buddha and the Mother over the figure-eight pattern. You will note that the sign of the X is the abbreviation for the sign of the figure eight. You simply erase the curves and you are left with the X in the center. Maximus! [MA-X-I-M-US] It is the representation of dedication to the Mother of all Life and to all that is suspended within Her Womb.

"It is not easy for unascended lifestreams to understand Cosmic Consciousness, identification of worlds all in one. What is the Being that I AM? What is the garment that I wear? Can you transcend planes and leave off from the identification of Myself and My role as an anthropomorphic form? Can you tear yourself from the boundaries of an image that looks like yourself and behold before you a Flaming Sphere, a Spherical One, a Consciousness that does not attempt to occupy a body such as your own or even a semblance of that form?

"I come before you, then, as a Sphere of Light that you may be weaned from that typical consciousness that would place Cosmic Beings in a mold inappropriate to Our functioning. As your scientists will soon display, there are vehicles and modes, and then there are again vehicles and modes for the journey, for the work, for the exploration of a cosmos. When you have outgrown a certain mode, it is put aside and you occupy another mode.

"Well, it is a Multiplication Factor. It is the Exponent of God Himself whereby God transcends Himself. Only those who have the Consciousness and the Light necessary, and the required Attainment, will have access to this Maximus Acceleration of Acceleration. But then We come for only one if there be but one. We come for two if there be but two. For you see, wherever there is a soul in Cosmos who has come to that point to fulfill the obligation to Accelerate Light in this manner, there I must come, there I must stand, there I must bow before the Flame of God. . . . "