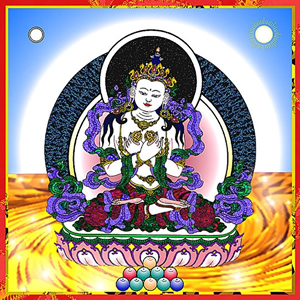 "I ask you: What fragment of the whole body of the Teaching of the Law, of the Great Dharma, of your own Causal Body, beloved, would you now say is the prescription for the opening of the mind and the heart of one who has been in a state of doggedly following a materialistic civilization and way of life for God knows how long?

"Yes, beloved, in a moment through a point of Light, the very right point of Light, souls may be awakened, they may be quickened, they may come to a deep realization because you are the catalyst! You are the catalyst — not necessarily knowing in your outer consciousness but always following the inner guidance and the inner direction that says: 'Yes, give this little something to that one. Give this little something to another.' And suddenly, someone's world turns around, someone's world is changed.

"O beloved, take out of your pocket that precious tool that is called ingenuity, ingenuity, and think of something that applies so immediately to the situation at hand that it will reach that one who is in a state of despondency. . . . "