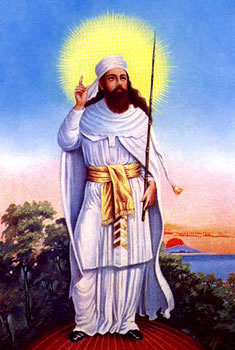 There were a number of spiritual teachers that were named Zoroaster or Zarathustra. The Ascended Masters have not indicated which one was an embodiment of the Zarathustra that has spoken to the world in public Addresses over the last six decades.

Historically, Zarathustra, also known as Zoroaster, was an ancient Iranian prophet and the founder of Zoroastrianism, a religion that was the national religion of the Sassanid Empire of Persia; it is predominantly practiced today by the Parsi community of India. Zoroaster is generally accepted as an authentic historical figure, but the period in which he lived remains unclear. Many scholarly estimates place him circa 1200 B.C., making him a candidate to be the founder of the earliest religion based on revealed scripture, while others place him anywhere between the 18th and the 6th centuries B.C. A Russian archaeologist, Viktor Sarianidi, links Zoroaster to circa 2000 B.C. based upon excavations of the BMAC (Asgarov, 1984). Indo-Iranian religion is generally accepted to have begun in the late 3rd millennium B.C. (e.g., the Soma cult), but Zoroaster himself already looked back on a long religious tradition. The Yaz culture (circa 1500-1100 B.C.) in the Afghan-Turkmen-Iranian border area is considered a likely staging ground for the development of East Iranian and early Zoroastrian practices.

Zoroaster was famous in classical antiquity as the founder of the religion of the Magi. His name is mentioned by Xanthus, Plutarch, Pliny the Elder, Diogenes Laertius, and by Plato in the Alcibiades. Ancient Rome estimates are dependent upon Greek mythology, and give dates as early as the 7th millennium B.C., which are the dates to which Parsis subscribe. Greek mythology, primarily the Shahnama of Ferdowsi, and oral tradition place Zoroaster quite early. Manly Palmer Hall, in his book Twelve World Teachers, arrives at a rough estimate ranging from 10,000 B.C. to 1000 B.C.

Annie Besant, in her 1911 lecture The White Lodge and Its Messengers, stated that Zarathustra went forth in the Empire of Persia "27,000 years before the Christian era to teach the builders of the Empire and to strike the key-note of the Faith which still is preserved in our own days. We see Him garbing the one Truth now in Fire  Fire the purest of all elements, Fire the purifier of all else. Fire, the Divine Fire on the altar; Fire, the Divine Fire in the Heart of man. Zarathustra was the Messenger of the Fire, drew down Fire from Heaven, was caught up when His Mission was over in a cloud of Fire and rapt away from the sight of men; but the Fire He lighted has not yet been quenched, and still His people remember the Word of the Fire; for no new fire may be lighted in the Fire-Temple by a modern Zoroastrian unless the Fire has flashed from Heaven and has lit a Flame on Earth; many a Fire-Temple has waited for years ere the lightning has come down from the clouds and set some tree on fire, so that the Heavenly Fire might be added to the fires gathered from the Earthly hearths. Thus strong even yet is the tradition which has come down from the time when Zarathustra's outstretched hand compelled the Fire to come down from Heaven, and to light the piled-up wood on the altar by which He stood." 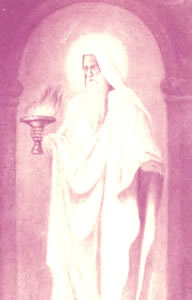 " . . . When time and time again you allow lesser states of consciousness to revolve within you, who are you to blame but yourself for indulging the tendency of your own emotional body to revolve those negative energies? And, yes, Blessed Ones, what does this do to your physical body? There is a reason why in the portraits of old, the saints have a supernal glow in their faces and a Divine Light in their eyes. They may have been imprisoned in dungeons for years upon years, but this did not shake their Faith nor their connection to the Heart of God  and that Radiance shone forth triumphant.

"You are called to go beyond the saints of old! You have been given the opportunity to invoke the Light within your own garments; to have the Fire of the Mind of God course through your mind; to have your emotions so charged with Light and yet held under the God Control of the Divine Mind that they will not be stirred, save the Light of God and the fingers of the Mind of God move through those vital currents, energizing the physical body itself.

"It is so difficult, is it not, to move through an entire incarnation carrying the weight, the relentless pressure of human thought and feeling pounding away at you constantly. You are called to invoke sufficient Light to exact a staying action  of a superior pressure of Light from within out  so that the Light streams forth from your own Heart Flame to hold in abeyance the weight of the worlds condemnation. Those precious few lightbearers who know and love God, who are held within the Christ Light, are despised by the majority of the human race, who in their jealousy and ignorance do not desire you to have your day in the Sun.

"What a travesty! For if they were to recognize what causes the Light in your eyes, the Peace that comes over your countenance, your Patience and Tolerance with them despite their anger and agitation, the Source which enables you to strive with an indomitable Faith and Trust in God and a commitment to the Destiny and goal of your Ascension  if they knew, if they could catch just a glimpse, do you not realize, Blessed Ones, how they would change? Perhaps for some it will take longer. But the seed, having been planted by your example and by the Teaching that you share, will bring about the change, ultimately, for their own acceleration on the Path.

"This is how you bring in a New World Religion. This is how you exact the Masters Instruction to bring forth the Torch of your own Being and raise it high, shedding Light into those areas of darkness, superstition, and negativity that have no place in a Realm where the Holy Christ Self resides, that have no truck with an Ascended Master Way of Life, which you are called upon to exemplify.

"Far too many of you think that in your own way you are just one individual not capable of making such a vast difference. But did not Paul make a difference? Now the Ascended Master Hilarion, he still carries a Banner of Truth, fostering Truth to every corner of the Earth. You, Blessed Ones, may be like Paul. You may also be like Mother Mary, giving Comfort, Love, and holding the Immaculate Concept for those that know not their True Identity. And this means even those who profess to know who they are, but in their blindness, their separation from God, and their false pursuits have not the clarity of vision nor the Vibration sufficient to understand the true Reality of their Being. . . . " 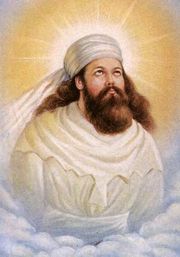 Zarathustra gave an address to the students during the midyear convocation of the Karmic Board at the Royal Teton Retreat, July 8, 1954, and referred to the conditions existing on the Earth after the "Fall":

" . . . Then, as the immortal Flame of God within the heart was ignored; as the attention of mankind fed primal life into the appearance and built those entities of thought and feeling which formed the great blanket of astral and psychic pressure, even the physical use of the fire element was lost to the masses and there were eras upon this fair Earth, where physical fire was known not! Such an era preceded the coming of Sanat Kumara and the Lords of the Flame from Venus. In those times, the great hordes of savages, the degenerate races had no use and knowledge of fire, and the spiritual community wherein the spiritual lifestreams retained the knowledge of the physical fire were walled in, and the warmth, the comfort, and the light of the fire which was a protection not only against the invisible psychic and astral creations but against the roaming animals was denied the mankind who had forgotten to feed and sustain the immortal Flame which was their God Presence with all the Power of God the Father. . . ."

Zarathustra, April 14, 2006 Voice from The Temple (The Temple of The Presence: 2006) Copyright © 2006 The Temple of The Presence ® Zarathustra, July 8, 1954 Bridge to Freedom Journal, November 1958. This Address was given by Beloved Zarathustra to the students at the Royal Teton Retreat, and released to the public through Geraldine Innocente. page 5 Luk, A.D.K.   The Law of Life: Book II, (Pueblo, Colorado: A.D.K. Luk Publications, 1989) Boyce, Mary. Textual Sources for the Study of Zoroastrianism, University of Chicago Press, 1984. Gnoli, Gherado. Zoroaster in History, Biennial Yarshater Lecture Series 2, Bibliotheca Persica 2000. Kriwaczek, Paul. In Search of Zarathustra: Across Iran and Central Asia to Find the World's First Prophet, Vintage (2004) Mary Settegast, When Zarathustra Spoke: The Reformation of Neolithic Culture and Religion, Costa, Mesa, CA, Mazda Publishers, 2005. Besant, Annie The White Lodge and Its Messengers, January 1, 1911 (Theosophical Publishing House, May 1931)