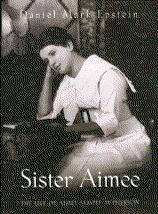 Aimee Semple McPherson was consecrated to God, before she was born, by her mother, a soldier of the Salvation Army. She was a scamp in school, a young widow in China, and a neurotic housewife in Rhode Island. But when the Lord spoke to her as she was at death's door, she accepted her ministry. She preached up and down the United States, traveling in a 1912 Packard with her mother and her children, without a man to fix tires. She preached in tents, concert halls, boxing rings, and speakeasies, prayed for the healing of hundreds of thousands of people, founded a Church, built a Pentecostal temple of Hollywood dimensions in Los Angeles (Charlie Chaplin advised her on sets, Anthony Quinn played saxophone in the pit), and she became, in the 1920's and 1930's, such a celebrity that the press publicly thanked her for having given work to so many journalists.

Sister Aimee is the story of a unique woman; of the power of passion that rejects compromise and a faith that will not be shaken. But it is also the story of the price of fame.