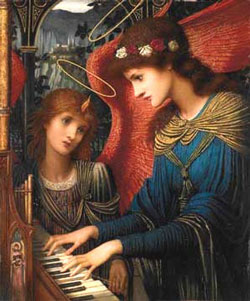 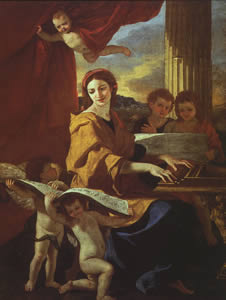 Butler's Lives of the Saints:

"For over a thousand years Saint Cecilia has been one of the most greatly venerated of the maiden martyrs of the early Church and is one of those named in the canon of the Mass. She was a patrician girl of Rome, brought up a Christian, and determined to remain a maiden for the love of God. But her father had other views, and gave her in marriage to a young patrician named Valerian. On the day of the marriage Cecilia sat apart, singing to God in her heart and praying for help in her predicament. When they retired to their room, she said to her husband gently, "I have a secret to tell you. You must know that I have an Angel of God watching over me. If you touch me in the way of marriage he will be angry and you will suffer; but if you respect my maidenhood he will love you as he loves me." "Show me this angel," Valerian replied. "If he be of God, I will refrain as you wish." And Cecilia said, "If you believe in the living and one true God and receive the water of baptism, then you shall see the angel." Valerian agreed and was baptized. Then he returned to Cecilia, and found standing by her side an Angel, who put upon the head of each a chaplet of roses and lilies.

"From that time forth Valerian and his brother Tiburtius gave themselves up to good works. Because of their zeal in burying the bodies of martyrs they were both arrested. Almachius, the prefect before whom they were brought, began to cross-examine them.

"Valerian testified that he and his brother were under the charge of Jesus Christ, the Son of God, who could impart to them His own wisdom. Almachius told him to tell the court if he would sacrifice to the gods and go forth free. Tiburtius and Valerian both replied: "No, not to the gods, but to the one God to whom we offer sacrifice daily." They were accordingly condemned to death and were beheaded. With them perished a man called Maximus, who had declared himself a Christian after witnessing their fortitude.

"Cecilia in turn was called on to repudiate her faith. Instead she converted those who came to induce her to sacrifice; and when Pope Urban visited her at home he baptized over 400 persons there. At length she was sentenced to be suffocated to death in the bathroom of her own house. But though the furnace was fed with seven times its normal amount of fuel, Cecilia remained for a day and a night without receiving any harm, and a soldier was sent to behead her. He struck at her neck three times. She was not dead and lingered three days, during which she formally made over her house to Urban and committed her household to his care. She was buried next to the papal crypt in the catacomb of St. Callistus.

"Pope St. Paschal I (817-824) transferred supposed relics of Santa Cecilia, together with those of Saint Valerian, Saint Tiburtius and Saint Maximus, to the church of Santa Cecilia in Trastevere. In 1599 Cardinal Sfondrati in repairing this church reinterred the relics of the four martyrs, the body of Cecilia being alleged to be then still incorrupt and complete.

"Today perhaps Saint Cecilia is most generally known as the patron saint of music and musicians. At her wedding, the acra tell us, while the musicians played, Saint Cecilia sang to the Lord in her heart. In the later middle ages she was represented as actually playing the organ and singing aloud." (1) 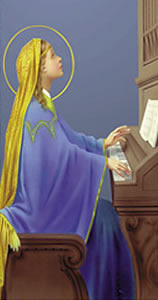 "About the middle of the fifth century originated the 'Acts of the Martyrdom of St. Cecilia' which have been transmitted in numerous manuscripts; these acts were also translated into Greek. They were utilized in the prefaces of the above-mentioned masses of the "Sacramentarium Leonianum". They inform us, that Cecilia, a virgin of a senatorial family and a Christian from her infancy, was given in marriage by her parents to a noble pagan youth Valerianus. When, after the celebration of the marriage, the couple had retired to the wedding-chamber, Cecilia told Valerianus that she was betrothed to an angel who jealously guarded her body; therefore Valerianus must take care not to violate her virginity. Valerianus wished to see the angel, whereupon Cecilia sent him to the third milestone on the Via Appia where he should meet Bishop (Pope) Urbanus. Valerianus obeyed, was baptized by the pope, and returned a Christian to Cecilia. An angel then appeared to the two and crowned them with roses and lilies. When Tiburtius, the brother of Valerianus, came to them, he too was won over to Christianity. As zealous children of the Faith both brothers distributed rich alms and buried the bodies of the confessors who had died for Christ. The prefect, Turcius Almachius, condemned them to death; an officer of the prefect, Maximus, appointed to execute this sentence, was himself converted and suffered martyrdom with the two brothers. Their remains were buried in one tomb by Cecilia. And now Cecilia herself was sought by the officers of the prefect. Before she was taken prisoner, she arranged that her house should be preserved as a place of worship for the Roman Church. After a glorious profession of faith, she was condemned to be suffocated in the bath of her own house. But as she remained unhurt in the overheated room, the prefect had her decapitated in that place. The executioner let his sword fall three times without separating the head from the trunk, and fled, leaving the virgin bathed in her own blood. She lived three days, made dispositions in favour of the poor, and provided that after her death her house should be dedicated as a church. Urbanus buried her among the bishops and the confessors, i.e. in the Catacomb of Callistus.

"The existence of the aforesaid martyrs is a historical fact. The relation between St. Cecilia and Valerianus, Tiburtius, and Maximus, mentioned in the Acts, has some historical foundation. These three saints were buried in the Catacomb of Praetextatus on the Via Appia, where their tombs are mentioned in the ancient pilgrim Itineraria. In the "Martyrologium Hieronymianum" their feast is set down under 14 April with the note: "Romae via Appia in cimiterio Prætextati"; and the octave under 21 April, with the comment: "Rome in cimiterio Calesti via Appia". In the opinion of Duchesne the octave was celebrated in the Catacomb of Callistus, because St. Cecilia was buried there. If, therefore, this second notice in the martyrology is older than the aforesaid Acts, and the latter did not give rise to this second feast, it follows that before the Acts were written this group of saints in Rome was brought into relation with St. Cecilia.

"The time when Cecilia suffered martyrdom is not known. From the mention of Urbanus nothing can be concluded as to the time of composition of the Acts; the author without any authority, simply introduced the confessor of this name (buried in the Catacomb of Praetextatus) on account of the nearness of his tomb to those of the other martyrs and identified him with the pope of the same name. The author of the "Liber Pontificalis" used the Acts for his notice of Urbanus. The Acts offer no other indication of the time of the martyrdom. Venantius Fortunatus (Miscellanea, 1, 20; 8,6) and Ado (Martyrology, 22 November) place the death of the saint in the reign of Marcus Aurelius and Commodus (about 177), and De Rossi tried to prove this view as historically the surest one. In other Western sources of the early Middle Ages and in the Greek "Synaxaria" this martyrdom is placed in the persecution of Diocletian. P.A. Kirsch tried to locate it in the time of Alexander Severus (229-230); Aubé, in the persecution of Decius (249-250); Kellner, in that of Julian the Apostate (362). None of these opinion is sufficiently established, as neither the Acts nor the other sources offer the requisite chronological evidence. The only sure time-indication is the position of the tomb in the Catacomb of Callistus, in the immediate proximity of the very ancient crypt of the popes, in which Urbanus probably, and surely Pontianus and Anterus were buried. The earliest part of this catacomb dates at all events from the end of the second century; from that time, therefore, to the middle of the third century is the period left open for the martyrdom of St. Cecilia. . . ." (2) 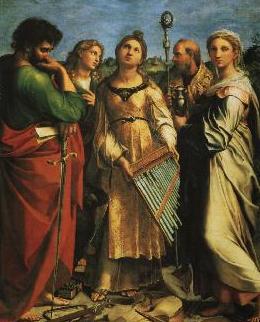 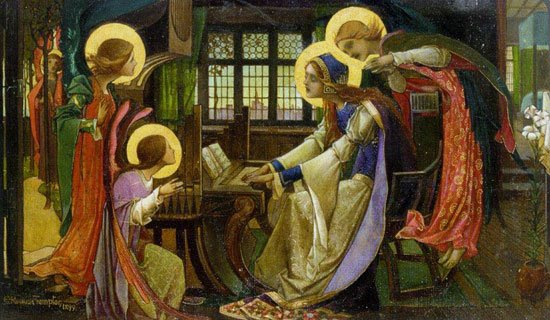