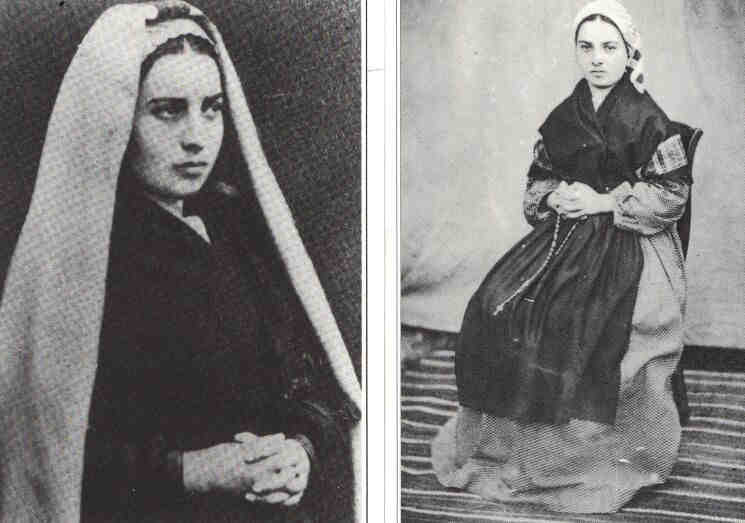 Saint Bernadette (1844 - 1879) was a devout peasant girl to whom the Blessed Virgin Mary appeared eighteen times between February 11 and July 16, 1858 near Lourdes, in southern France, when she was 14 years of age. On the afternoon of Thursday, February 11, 1858, the first of her seventeen apparitions began. The visions took place in a desolate and locally forbidden grotto in Massabielle, France. Marie Bernard, or Bernadette as she was affectionately called, explained the vision she experienced in these words: "A gentle Light brightened the dark recess and there in the Light, a smile. A girl dressed in a white dress, tied with a blue ribbon, a white veil on her head, and a yellow rose on each foot." (1)

During the ninth apparition, Bernadette was directed to scratch the soil on the the ground and there found water gushing forth. She then obediently drank the water of the stream. Blessed Mother Mary during the 16th apparition spoke the words, "I AM the Immaculate Conception.". Mary asked Bernadette to "pray for sinners" and gave the warning "Penitence!" The famous grotto is now surmounted by the Church of the Rosary, which contains numerous crutches and gifts memorializing miraculous cures credited to Our Lady of Lourdes. (5)   Nineteen hundred years earlier, Joseph of Arimathea, Mother Mary, and some of the disciples of Jesus went on a journey to Glastonbury in the British Isles, stopping at the site of the future Shrine of Lourdes to establish a Spiritual Power Focus there. (6) 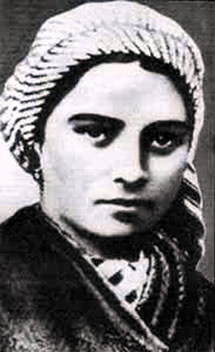 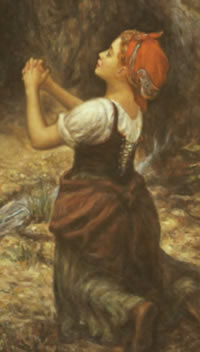 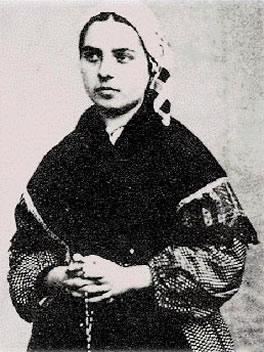 Bernadette Soubirous prayed the Rosary and received Holy Communion daily and lived a life of humility and sacrifice. She endured the painful and debilitating disease of tuberculosis of the bone for more than seven years while she served as a Sister of Notre Dame at the Convent of Saint-Gildard. During the last two years of her life she developed a large tumor on her knee, which she kept a secret as long as she could so she would not be relieved of her duties, as portrayed in the film The Song of Bernadette (1943) based on Franz Werfel's novel by the same name. (5)

Finally, on December 8, 1933, on the Feast of the Immaculate Conception, Bernadette was declared a Saint by Pope Pius XI. Present for this ceremony were the Reverend Mother General and one hundred and sixty of the Sisters of Nevers, Bernadette's sister in law, and two of her nephews. Bishop Patrice Flynn, the Irish Bishop of Nevers, and Bishop Gerlier of Lourdes and Tarbes, were also present. The Holy Father addressed the assembled multitude:

"To the honor of the Most Holy and Indivisible Trinity, for the exaltation of the Catholic Faith and for the spread of the Christian religion, by the authority of Our Lord Jesus Christ, of the Blessed Apostles Peter and Paul and by our own, after mature deliberation and having often implored the Divine Assistance, on the advice of our venerable brethren the Cardinals of the Holy Roman Catholic Church, the Patriarchs, Archbishops and Bishops, We define and declare the Blessed Marie Bernarde Soubirous a Saint, and we enroll her in the Catalogue of Saints, ordaining that her memory shall be piously celebrated in the Universal Church on April 16th each year, the day of her birth in Heaven. In the name of the Father and of the Son and of the Holy Spirit."

The body of Bernadette remains in the main chapel of the Convent of Saint Gildard in the city of Nevers, France. Less than four feet away, a constant stream of pilgrims kneel, seeking Divine Assistance from Heaven.

Although she was offered her Ascension at the close of her embodiment as Bernadette, she made the free will choice to come back into embodiment as Carolyn Louise Shearer. Currently serving as an Anointed Representative® at The Temple of The Presence, Carolyn Shearer again brings forth the Words of beloved Mother Mary - as well as Others of Heaven. 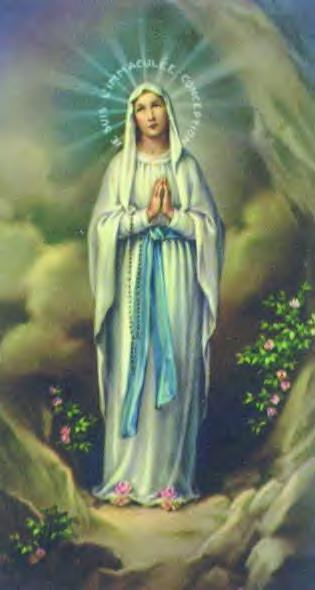 "Remember always that I AM your Advocate in time of need. I do not ever condemn you, but always speak those healing words — as did My Son — "Go and sin no more!" Persevere — as Bernadette, as Saint Thérèse — you too can live daily in Heaven's Way if you will!

"Arise and shine for thy Light has come! I AM your Mother Mary."

According to Elizabeth Clare Prophet, Bernadette appeared to her and Mark Prophet in Colorado Springs, Colorado many years ago. Bernadette's Holy Christ Self explained that she had maintained a state of Child-like Innocence throughout her life as Bernadette Soubirous. She conveyed to them the teaching that it is not necessary to descend into the duality of the knowledge of good and evil in order to achieve saintliness. It is possible to maintain a state of Purity and Innocence throughout one's adult life.