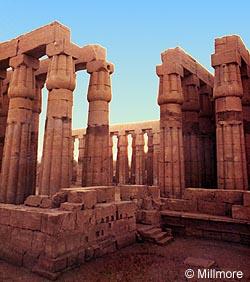 This Retreat of Serapis Bey and the Brotherhood of Luxor is located in the physical and etheric realm at Luxor, Egypt. The Brothers and Sisters of the Ascension Temple have dedicated their lives to sustaining the Ascension Flame - through which all who qualify may return "Home" to the Heart of God and the Ascended Masters' Octave. (1)

When mankind allowed its consciousness to be impregnated with shadows and lost the control of its thought and feeling worlds, some few realized that a way back to Perfection must be found and sustained. While the masses enjoyed the "pursuit of happiness," these few continued to draw Primal Life, qualifying it with Adoration to God and His Heavenly Messengers, then consciously sending that praise, adoration and thanksgiving up to them. This ascending stream of Love is a current of actual Power and lifts the energies of those who choose to avail themselves of connecting with the Ascension Flame for the purpose of raising the vibratory action of their own inner and physical bodies.

Every being who has sublimated the impure energies of his own world has received assistance from the Brotherhood of the Ascension Temple to help in the acceleration of the vibratory action of the electrons composing the atoms in the four lower bodies. This momentum of ascending energy is increased by the Gratitude and Thanksgiving of each Being who ascended on Its current into the God-Free estate. The Seraphic Beings who serve with the Brotherhood of the Ascension Temple gather together all the prayer-force of mankind and weave it into the Ascension Flame. Thus, in each man's personal Victory, does the ascending current become more strong, powerful and efficacious for those following after him. The use of any Activity of the Sacred Fire increases the Power of that Fire for all others, even as the first explorer, cutting his way through the brush, makes it easier for the next group to make a foot path, until finally there is a wide highway to a specific goal.

The Focus of the Ascension Flame was changed when Atlantis sank. At that time the actual Flame was carried by those who loved It, priests and priestesses of the Sacred Fire, across the seas to the land of Egypt. Here, traversing the Nile (some 480 miles south) they reverently established a new Focus at Luxor for this Ascension Flame and have guarded It since that day! (4)

The Ascension Temple and Retreat at Luxor is near the Nile River in the desert of Egypt. There is a large square white building made of stone with a high wall surrounding it. There is a large and beautiful courtyard with fountains and nearly every species of flower and bird, for the purpose of the perpetuation of them.

The Ascension Flame was taken by Serapis to that locality just before the sinking of Poseidonis (the last remnant of Atlantis). He established It there and in later embodiments built a Temple around It. The present subterranean Retreat was built during the decline of Egypt, one building has been retained above ground. The entrance to the Ascension Temple is through this white building. There are other buildings below the earth's surface which are used by the Brotherhood of Luxor.

The Ascension Temple is built in a square; in construction, it is composed of tall columns, twelve on each side; these are whitish or colorless. The Temples, one within the other, are the action of the Seven Rays. The first room or square is blue representing the First Ray. The next is a square within that, which is yellow, then within that is the pink and so on for the Seven Rays, each one formed by large columns. The Flame Room which composes the center is all white. There are no doors between the columns, the dividing line being formed by Radiation of the respective Rays. The outer Temple is large and can accommodate a great number of people. A neophyte coming into the Retreat knows only the outermost room. It being the activity of the blue, he would not see beyond that or into the next one, he would have no idea there was another room, another portion of the building there, until his consciousness was raised and he was prepared to enter the vibratory action of the next section whereupon he would simply walk in, between some pillars.

The Altar is in the center of the Flame room and is shaped like a pyramid, on the top of which is an Egyptian urn holding the Ascension Flame. The chelas encircle the Altar, at ceremonies. The activity of twelve is used throughout this Retreat. The Twelve Virtues of the Godhead (which the zodiacal signs represent) are represented around the Altar.

There is a collection of valuable fine arts, and a great library of rare books accessible to those admitted to the Retreat, with no instruction as to what pursuit to follow. Absolute obedience is a demand of the Brotherhood of the Ascension at Luxor, in Their Retreat, where the demand for complete obedience is inflexible. They give training in controlling vibration and energy, and the mastery of substance.

This Focus is the activity of the Fourth Ray, and with the assistance of the Brotherhood the dormant, deep rooted qualities and the last vestige of one's human creation is brought forth to be transmuted. When it is done, this enables the Ascension to take place.

The Ascension Flame raises the vibratory action of an individual; at a certain point of frequency It neutralizes or cuts the gravity pull and serves as a bridge from the human existence into the Divine - the Ascended State. The Ascension Flame gives one the feeling of new Life, Hope and Buoyancy. It is the sustaining Power of Enthusiasm. This Ascension Flame contains within It the momentum of all Ascensions from the Earth since It was established.

Many thousands of individuals have the opportunity now to be prepared to make the Ascension at inner levels without having to re-embody. These lifestreams are taken to the Ascension Temples in the inner realms and there they are taught the Law and given assistance of the Ascension Flame. The Dispensation for this was obtained January 1, 1954, by Archangel Michael. The Ascension Temples at inner levels were opened April 14, 1954, to all those who came under the Dispensation, whereby they would not have to re-embody but could make the Ascension from there. These Temples with about forty-foot doors, are all white and have the capacity to seat thousands of persons.

The Retreat at Luxor represents the action of drawing-in, or completing the cycle of Earth's evolution; while the Royal Teton Retreat represents the going forth. The Brotherhood of Luxor usually wear white robes with crystal trimmings at the hem and cuffs and a sun over the heart. The headdress has a golden band with a sun and with wings of flame on either side, on the forehead. The motto of the Retreat is "Try." (3) 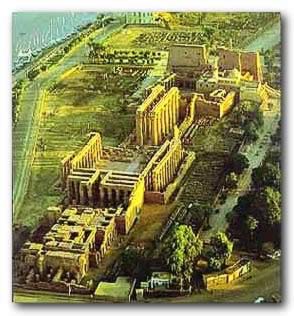 Flame of the Ascension Temple:

Hierarch of the Ascension Temple and Retreat at Luxor:

Those serving at this Retreat:

Keynote of the Ascension Temple and Retreat at Luxor: