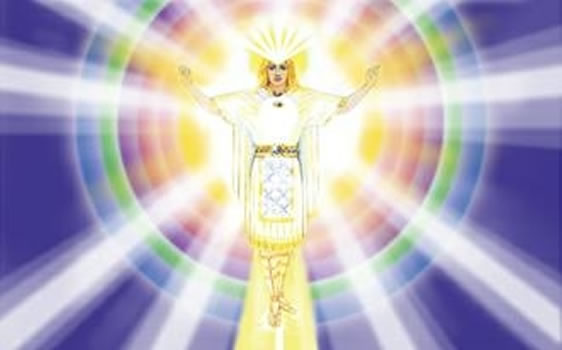 " . . . The order of science has reached forward in giant strides while religion has fallen backward, lagging still in medieval superstitions, in old encrusted hatreds, and in diabolical involvements of horror, fear, and greed. To condemn the world does not prepare it for salvation of any kind. The real example of benign power is to be simply the Christ. This is to show the world the meaning of hope in the renewal of all men who can do likewise.

"Let men learn, then, to do well; and let them not accept the stimulus of a wounded ego as the motive or excuse for creating chaos and destruction. Truly, there are those who would destroy the earth because they are contemptuous of life itself, and they resent the blows that have been dealt them. They do not understand the balance of cosmic law that clearly sayeth, 'Whatsoever a man soweth, that shall he also reap.' (4)

"If they would look within themselves first and thence upward to their Presence  to the Presence of God that uniquely belongs to them, the Spark of their own Happiness  they would find that the means of salvation lie within the domain of the Life that beats their own hearts. And when the Sparkling Jewel-like Radiance of the Cosmic Ego, the Spiritual Man, stands forth in his blazing Identity to be seen as the Reality of their own Selves, as the Truth that lives within them, they will begin to pour forth Universal Love in such paeans of praise to God for the Gift of Life as to receive, over strong cables of Light, the Wisdom that will guide their every act. And as in the matter of Jason and the Golden Fleece, they will begin to pursue their goals with cosmic diligence.

"We await the era of the builders, of those who strive to build up their own and others' characters, of those who honor God and country, who understand the meaning of forging links of spiritual strength, who perceive the way of blessing, rather than spoiling. Long ago the Father said, 'Woe unto those who spread malice between brethren.'

"Truly, our duty is to spread Harmony, Joy, and Cosmic Effort. Let us unleash, then, the power of the young sapling of Truth. Let us plant a tree, build a house, sanctify a life, cleanse a leper, or even raise the dead if our faith be great enough.

"Above all, let us institute constructivism for the world and ignore those prophecies that are born of fear, for they have torment. (5) On the other hand, let men not ignore God; for He is the Hope of the earth, and His Goodness, spread abroad in the lives of countless millions, will enable the fulfillment of these prophecies of Beauty to occur.

"Let men predict beautiful things. Let them dwell in the tents of the Lord who is the goodly Tentmaker. He spreadeth His Canopy over the whole Earth, and he filleth the consciousness with Good Things. How rich is His Bounty, and how Mighty are His Judgments. Truly, men should trust in Him. Thus we shall forestall those catastrophic manifestations that are born of human consciousness and conduct. . . . "

Between twelve and fourteen thousand years ago, the country around the Amazon River in South America was at an altitude of around five thousand feet and was semi-tropical. All this was changed during the last cataclysm around twelve thousand years ago. This action submerged the cities there, widened the mouth of the Amazon and changed the east and west coast lines of the continent.

A marvelous civilization had existed there with Casimir Poseidon as the Ruler. He was already Ascended then, and through His Guidance that civilization reached great heights of achievement and Perfection. Casimir Poseidon's motto was: "Learn to love to do well, and you shall."

The great heights of achievement that this culture reached started to decline when the people turned from the Truth they had loved and began to indulge in selfish pursuits. After the Masters' repeated warnings to the people to turn from their evil ways and their failure to heed the Heavenly admonishments, this culture was destroyed through cataclysm.

In 1930, Saint Germain described, and visually re-animated from the Akashic Records, the scenes of this extension of Atlantean culture to Guy Ballard:

"This civilization was built during the period between the period of 12 and 14,000 years ago, the portion of the country we are concerned with is that section reaching from were the Madera River empties into the Amazon to a point west were the Amazon touches Columbia and Peru. 13,000 years ago the Amazon was held within great dikes of stone. The entire country around it laid at an altitude of at least 5,000 feet. Instead of the tropical climate it has today, a semitropical temperature existed the year round. For a great distance in this locality the country formed a table land plateau. Near the mouth of the Amazon were wide beautiful falls. The city was built between the falls and the sea coast, about ten miles south of the river. There were great reptiles and vicious animals to be found in the Madera River to the north. Near the Madera River Saint Germain described the following; this is the site of an ancient city, the capital of the empire of Meru and most important place in the civilization of that period. Here He raised His hand and it became clearly visible as any visible city of today. Notice He exclaimed how it was built in a series of circles and its business streets go out from its center, like the spokes of a hub of a wheel. The outer circles were pleasure drives built every third mile. There are seven of these making the city forty six miles in diameter, including the central circle. Thus the business activity did not interfere with the beauty and convenience of the drives.

"The inner circle was four miles in diameter and within it were placed the executive buildings of the whole empire. The streets were all beautifully paved and constructed eighteen inches to two feet below the surrounding buildings and grounds. They were flooded every morning and washed thorough clean before the activities of the day began. Observe the unusual magnificence of the pleasure drives and how gorgeously beautiful were the plants and flowers forming the banks on both sides. One very predominant feature their architecture was that the top floors of almost all the buildings, especially the residences were built with adjustable domes. These could be opened and closed at will as they were constructed in four sections and arranged as to serve for their sleeping or entertaining purposes. The days were never uncomfortably warm and the evening the wonderful cool air from the mountains came as regularly as day appeared. When entering the capital an enormous structure of great beauty. The capital interior was finished in cream colored marble veined in green and the floor of a moss green stone resembling jade in a sector had been laid so perfectly as to seem almost like one piece. There were large tables in the rotunda of the same kind of green stone as the floor but Lighter shade. These had heavy bronze pedestals placed about three feet from each end.

"These people were in direct contact with all parts of the world, through marvelous aerial navigation that had been brought forth for their use. All Light, heat and power were taken directly from the atmosphere. Atlantis, during this period, was in a wonderful state of progress because she had been governed and shown the way to Perfection, by various Ascended Masters appearing from time to time and ruling for the spiritual uplift of the people.

"Again and again all the way down the ages, whenever a great civilization has arisen it has been founded on Spiritual Principles in the beginning, and maintained obedience to those Laws of Life during the time of its ascendency. However, the moment any government or the people themselves begin to drift into lax ways, so that injustice and the unclean use of Life become habits, either of officials or the people, disintegration begins and continues until they either return to the Fundamental Laws of Balance and Purity, or are wiped out by their own discord, that the Balance may be re-established and a new start given.

"Casimir Poseidon was a direct descendant of the Mighty Ascended Master Rulers of Atlantis. In fact, the civilization over which he ruled was a child of the Atlantean culture and attainment. His capital city was famous throughout the world for its magnificence and beauty.

"As the rural districts are shown, watch the method by which objects are transported, for the power these people used was generated in an instrument-like box two feet square and three feet long, attached to the mechanism of the implement in use. The water supply from the streams was placed under control and its power also utilized. There was no need for police or military organization of any kind, because of the method by which the people were reminded of `The Law,' and the wonderful sustaining power that was radiated . . . "

Thus continuous conscious awareness of the Higher Realities and Spiritual Foundations of Life was enabled. To the east in the park, stood a magnificent building. Over the entrance were placed the words: "God's Living Temple to Man". It was much larger within than seemed apparent from the outside. There was seating capacity for at least ten thousand people.

In the center of this immense temple stood a pedestal about two feet square and twenty feet high, made of a Self-Luminous milk-white Substance that gave off a White Light with a breath of pink in it. Upon it stood a crystal globe two feet in diameter made of some kind of Substance holding a soft, Self-Luminous White Light within. It was very soft, and yet so intensely luminous that the entire building was brilliantly Lighted.

"That sphere was made of a Precipitated Material enclosing an Intense Focus of `Light'. It was drawn and placed in the temple at that period, by one of the Great Cosmic Masters, as a sustaining and Life-giving activity for the people. It continually sent forth not only the Light but an Energy and Power which stabilized their activities and the empire. That sphere of Light was focused by the Great Being and a building erected around it afterward. It was really a precipitated focus and concentrated activity of a supreme God Presence. The great Cosmic Master who established It appeared once a month beside the Light and proclaimed the Law of God, the Law of Government and Law of Man. Thus He decreed the Divine Way of Life and the Focus of the Christ Activity for the people of this age."   (6)