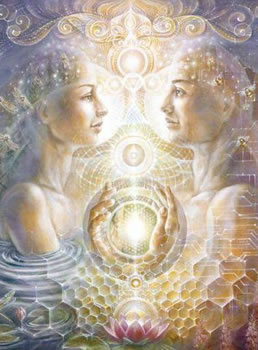 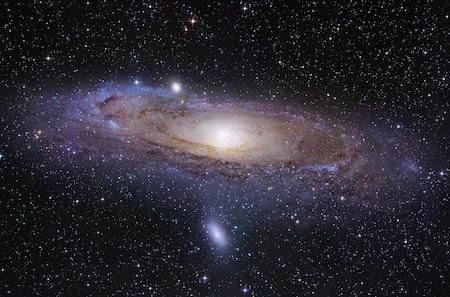 " . . . Helios and I belonged to a Galaxy much larger than this one in which We presently serve. We were a PLANET in that System and We were number four, just as the Earth is number four in relation to the Sun today.

"The System to which the Earth belongs (your System) came from the Central Sun of Alpha and Omega and has forty-nine Planets with Seven Suns (56)- one hundred less than the System of Elohae and Eloha. Let Me repeat: There is the Central Sun, from which Helios and I came, and beneath it twelve Suns. The fourth Sun down was the Sun to which We belonged and was Alpha and Omega. That sun, in turn, sent out twelve Planets in a horizontal manner and Helios and Myself were the Fourth Planet out from the Sun. This was on the out-breath, the Suns descending and the Planets expanding - the out-breath of the Godhead so far as the creation of this System was concerned.

"We did not dissolve! That is the thing that the student body becomes frightened about - becoming nothing, through the process of absorption. But that is no more true than you, as individuals, can become nothing through being absorbed into your own God Presence when you become Ascended! In this great Causal Body a Sun, whether it is a Sun of Our System or Alpha and Omega, is of tremendous size. In it there are glorious Temples of Light and when the Sun Gods return with their Own Electronic Belt - that is all the Planets and Intelligences and Beings within Them - they just enter into a Sphere set aside in the Electronic Belt around that Sun and remain as intelligent, conscious Beings. . . . "