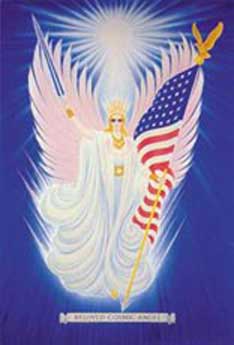 Great Cosmic Angel Upon Whose Crown Blazes the Word "Union"


" . . . Don't let down for one day your demands that the entire war accumulation of the world be bound back into its own cause and forced to annihilate itself. That mass accumulation is but a whirling of energy just like a tornado or cyclone. It gets to whirling, and it simply catches up all with its path and carries them to destruction. If you are to be kept free from that, you are going to have to be charged and surrounded by the Transcendent Powers of the Sacred Fire and the Cosmic Light which that human creation cannot control. Therefore, when you demand the God Control of everything in your world, and the God Powers of your Life Streams to come into you with such force that it compels you to transcend your limitations, then it is as if you stepped forward on Wings of Light, and where heretofore you have had struggle, you go forth easily to Victorious Accomplishment.

"There isn't anything in this physical world that is greater than your use of the Sacred Fire through your Calls to your Blessed 'I AM Presence'; and the more you call It forth, the more It enfolds you in the Power of Its Love and Its Blessing. Sometimes, perhaps when you see so much of discord in the outer world, you get weary of calling the Sacred Fire into action; but just remember, every time you give this Assistance to any condition of the outer world, sixty percent of that Blessing is anchored within your Life Stream for Eternity. So if the Service to life seems a little strenuous, after all, you are the greatest beneficiary, even when you try to correct conditions of the outer world that are so vicious. But don't fail to clothe yourselves in the Transcendent Powers of the Sacred Fire, the Transcendent Powers of the Cosmic Light Substance, the Transcendent Powers of that Miracle Love from the Heart of the Great Central Sun, the Transcendent Powers from the Ascended Masters' Octave that you may use in this world to break the limitations that have sought to wind themselves about you. . . . "

" . . . What do you know, O people of Earth, of the Realms of the Angels? What do you know of those Immortal Sons of Fire Who never have been subjected to the grossness of mortality? Can you soar in your highest thoughts and exultation into the essence of Our feeling? Come, then, partake of the bread of Heaven, partake of the angelic bread of Divine Unity! While upon Earth the forces of destruction and the terrors unleashed by astral densities continue to wreck a holocaust of fear and wretchedness upon mankind, ever misusing the energies of fallen angels to perpetuate man's discord; throughout holy space, the Almighty ever-living Light of God that does not fail, that cannot fail, floods the Universe with perpetual Harmony wherein is no incitement to rebellion or any unjust criticism of the plans, purposes, or Will of Heaven.

"Individual man, then, must stand guard every moment at his own doorstep to keep his house sweet, and his heart a gateway for praise, wherein the glory of Unity is preferred above all else. The triteness of human concepts shall be engulfed in a whirlpool of Light. The causes of misery, destruction, war, discord, disease and tyranny which often accompany temporal power in men and nations, shall be drowned in a vortex of Transmutation.

"Both through enlightened leadership and rise of a responsible citizenry devoted to the cause of universal harmony and freedom, the crying needs of this blessed planet Earth for divine Unity and Direction must be met. Men of virtue and determination must stand forth who will sacrifice, when necessary, personal advancements and acclaim for the common good, and who will press onward as did Moses to lead the children of Israel in the face of every human rebellion to the Promised Land. I know the meaning of such struggle for My guiding hand and fiery form remained a Pillar of Fire by night and a Cloud of Witness by day to those recalcitrant wilderness wanderers, spurred by the fear of Pharaoh and Egyptian bondage on one side and the sternness of the Law rumbling from Horeb's heights on the other. Yet, Israel was at last established and knew peace and glory in the days of Solomon.

"America, India, all nations must reach out through the hearts of their people to know the full meaning of liberation and freedom from falsely imposed materialistic bondage  from the old habits of greed and tyranny of the centuries and the round of senseless inharmonies which have but wearied the hearts of mankind without bringing peace to any man. The Christ sought to erect no tabernacle save the House of Peace within men. He sought the Unity of each heart with its Divine Presence, and the Unity of understanding between heart and heart. His is the way of Peace and hence free from all destruction.

"Men's acts fall into two classes, those of the builders and those of the destroyers; and at times the same men alternately follow the one lead and then the other. Let men learn stability to do well and to build the Temple of God without strife over minute matters. Let them consume their differences in the Sacred Fire and seek to construct lives of everlasting Beauty in the face of every human shadow projected from infamous histories or etheric records of past embodiments. Let men cease to permit their bodies, minds and identities to be associated with those sinister ends which pit one lifestream against another and seem to provide causes for despoiling the constructive endeavors of The Mighty Brotherhood of Light.

"Let men do good and leave all judgment to the Almighty and The Great Karmic Board Who, as His Appointees, are well qualified to resolve and balance all such matters. Then shall a surge of Light's Oneness sweep the Planet and the City of God shall be swiftly builded among the family of nations in a spirit of perfect Unity. How else shall the Peacemakers fulfill the requirements needed to be called the Children of God? And how shall there be Peacemakers if the very Elect, chosen to be Exemplars of Peace, are deceived by the forces of disunity?

Lord Ling (Moses): "You will remember that after leaving the Egyptian court I spent much time in restless wandering in the desert. I seemed unable to fathom either the reason for that feeling of restlessness within my heart or to realize the real purpose for My Being. One day the Great Cosmic Angel of Unity, Micah, visited me in the desert. When He had parted the human veil for Me and enabled Me to understand the commands which were given Me as to how I was to go before Pharaoh and his court to demand the release of the Israelites from their bondage in that land, I was not only amazed but somewhat frightened as well, for in that embodiment as Moses of which I speak, I was not eloquent of tongue. Right there I fell to my knees and said, 'O Lord of Life! Send someone more qualified than I to persuade the might of Pharaoh!' Yet through My acceptance of the Truth in beloved Micah's tremendous message of the hour that the true Name of God was 'I AM', I was filled with sufficient Strength, Courage and Power to return to Egypt and utilize those Powers which were Mine. So through the assistance of the Great Angel Micah, and My use of His Instruction in the performing of various Miracles which are chronicled in your Bible for your reading, the chains of slavery were loosed from those people and we were able to leave the land of Egypt.

"Until we had traveled quite a distance into the wilderness I had not realized that those Israelites did not come with Me because they either believed My vision or because they thought I was a Messenger of God. I found that they came out with Me because they saw no other way out of bondage! So when the Israelites came to the place where the blazing sun heated desert sands so that they blistered soles of their feet, and when we came to a place where that vast multitude had neither food nor water, I knew what it meant to feel resentments of reluctant energies of people and thousands of voices crying out in disappointment. During those times when I was the target for so much of their resentment and rebellion I knelt often before the Lord of Hosts and prayed for Assistance with all My Heart. In answer to those prayers and Calls for help, the water sprang forth from the very rock itslf, as you have often read, and manna fell from heaven! Thus were our physical needs immediately and satisfactorily met and we were able to survive.

"Beloved Micah told Me that we were to spend some time in the wilderness preparing for our entrance into the Promised Land. To this end, He instructed Me to ascend to the top of Mount Sinai where I would receive from God the Law by which to govern this people. When those who were willing to accept this purification and spiritual instruction were ready to enter the Promised Land, they would then come with a greater realization of the Truth of the Word of God, acceptance of His Reality and a desire to worship Him only. At the command of Angel Micah, I obeyed and ascended Mount Sinai where I received and recorded upon actual rock which was there the Law for that Cycle. While I was thus engaged, right back into thoughts and feelings of the world of form, fleshpots of Egypt and worshipping of idols which they had known went my blessed people again!

"Today you stand at about the same place as I stood then. There are more than three billions of people in embodiment on this Earth today chafing under chains of sorrow, sickness, lack and limitations of every conceivable description, and all calling for relief from their distress. Were you to suddenly loose them all from their chains after a short while you would know what I mean when I say that you will remember me and my experience in the coming days! When the weight of shackles is taken from their wrists, when they are able to stand erect again and when the greatest of the discomforts are alleviated, then will you see just how far they will go in pleading for Spiritual Enlightenment! Because I know so well the tendencies of outer human consciousness I come to you today to offer my assistance in advance so that where I suffered much, you need not if you will heed my words and give me opportunity to assist you. If you will so invite me, I shall move with you and bring you Victory, beloved friends, helping you to be poised and controlled in my feeling of Happiness as you henceforth begin to create and endeavor to sustain an atmosphere of Happiness about you at all times." 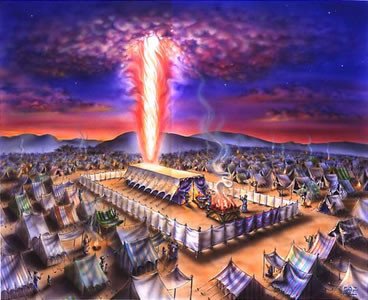