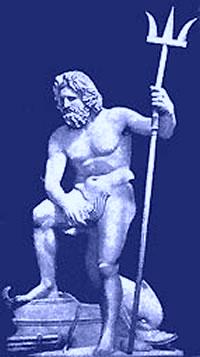 "Beloved ones! I greet you today in the Name of the Universal I AM Presence and the Beloved Helios and Vesta - Whose summons I answered, offering the full-gathered Cosmic momentum of My Lifestream together with that of Beloved Luara (My Twin Flame) and all the Undines at Our command. We offered to create and sustain the substance of the Water Element upon the Planet Earth.

"Each of the Directors of the Forces of the Elements had received, through aeons of time, opportunity to develop the power of precipitating certain substances as well as the power to control that substance and those Beings offered to serve with Us wheresoever We chose to offer Our services. Other Great Intelligences also responded to the call of Helios and Vesta for the service of creating the water element for the Earth but, because of certain momentums and affinities in Our lifestreams, Beloved Lunara and Myself were chosen to create and govern the Water Element which forms a cushion for the landed surface of this Planet. It also makes up the greater part of your physical and emotional bodies as well.

"All mastery requires the conscious control of the rate of vibratory action of each electron which is to be used for a specific purpose. Thus, to create the substance which you know as water, it was necessary for Us to have learned how to consciously use Our creative power of thought (making the substance of the water) and Our power of feeling to sustain the harmonious quality of that substance and the Beings Who work with and through that Element.

"The vibratory action of substance required for the Water Element of the Earth at the time of creation was much more rapid that it is today. The waters of the beautiful oceans, lakes, and rivers then were crystalline and iridescent. The waters literally 'sang' and added to the music of Earth's beautiful atmosphere. The Undines were happy to serve in such a beautiful Element and truly, all was Peace in the Kingdom in which We served. At that time the people of the Earth loved the water and enjoyed its purifying and refreshing service, as well as sailing happily upon its surface. In turn, the Undines and the electrons that made up the Water Element loved mankind and enjoyed serving them.

"Because the emotional bodies of mankind were happy, reverent, pure and free of discord, the people moved effortlessly upon the Earth - there being no weight of misqualified energy around the electrons in their four lower bodies - particularly in their emotional worlds. It was truly an Era of contentment and peace in the loving association among Angels, Masters, the mankind of Earth and the Elemental Kingdom. It is toward the re-establishment of this Era permanently that We are all now serving cooperatively in this Cosmic 'push' toward purification of all the Elements in the Earth, on Its surface and in Its atmosphere.

After the pollution of the consciousness of mankind through the coming of the 'laggards' from other Stars, it was necessary for the Directors of each Element to lower the vibratory action of that Element so that it might be efficacious to the more slowly vibrating of Earth's people. This required the mastery of which I just spoke changing the rate of the vibration of electrons and atoms in the Water Element, but still keeping them harmonious even as the slow, graceful rhythm of the waltz is just as harmonious as the rapid swirling rhythms of the great Salamanders and Sylphs Whose dances are a paean of praise to God just for the very gift and use of Life itself. Although the substance of the various Elements had been consciously conformed to the use of the ever-densening bodies of the people of Earth, the actual pollution of the Elements of Air, Water and Earth was affected by the very people who were guests upon this Planet!

"Then the control of the Undines, the natural obedience of the Water Element in the rise and fall of the tides, etc., took much greater power upon Our parts. Natural rebellion arose among them from the unnecessary pollution of the Water Element, and only great patience and Herculean God-Control kept the waters of the Earth from engulfing the ungrateful masses.

"Only at times when Cosmic Law ordained the necessity for cataclysmic activity wherein landed surface should be mercifully sunk beneath the seas for purification, did We allow freedom to the Water Element to spread Its curtain of purifying substance over polluted land.

"We, too, are obedient to Cosmic Law and act only upon Divine Direction! We, too, draw forth from the One Source whatever specific Powers are required to serve in the Element in which We offered to assist Life. Water is ordained by the God of all as a friend to man. Is man such a friend to the Water Element? Ponder upon this!

"As the Beloved Astrea told you last evening, mankind's use of the various Elements to serve a destructive purpose always brings recoil upon the personal self. The Law of Cause and Its ultimate effect upon its creator is inexorable - except where expiation of the cause and the effect can be invoked and utilized by those who love their fellowman enough to consciously call for this expiation.

"Beloved ones, many atrocities have been committed by the mankind of Earth, using the Water Element to extinguish life (through drowning, etc.), not only of human beings, but of animals as well. Many lifestreams have participated in wars wherein many ships were sunk and great numbers of people passed from the body in excruciating fear and suffering. These records are still within the etheric and emotional bodies of those now in embodiment here, as well as within the inner vehicles of many yet to be born here. Fear of the Water Element is due to either having suffered shipwreck and drowning, or having participated in causing others to suffer such agonizing experiences. In certain specific places where many ships have been wrecked, the ethers are filled with the moans and cries of those who have long since passed into happier lives and mercifully, no longer remember those tragedies. These destructive etheric records form vortices of distress in which hurricanes, typhoons and dreadful storms are born.

"What think you of the etheric substance which vibrates in the atmosphere around the location of the sinking of the one ship alone the Lusitania - not to mention the many other places where the tides, hidden sand-bars or rocky peninsulas have formed snares for the unwary seamen? The use of the hidden mines and the submarine warfare in your present day has also heavily charged the etheric substance around the Planet Earth with great distress besides the many other tragedies of the seas in ages past.

" . . . Some of the Undines too, (like the Salamanders), have been invoked and used for destructive purposes and these are often attached to the lifestream of such an individual who has so invoked them. In this case, the Elemental has become the master instead of the servant of such an individual, spurring that lifestream on to continue his practices of cruelty in the use of the Water Element. Call now that every such Undine be purified by the Sacred Fire and cut free from the desire to torment mankind ever again. . . . "

" . . . What do you suppose the 'Lorelei', spoken of by Homer, really were? They were Undines bent on destruction, mischievously affected by their proximity to mankind's destructive impulses.

"The excessive droughts, the flash floods, the unequal distribution of the precipitation of water in various places, is due to mankind's abuse of the Water Element in the past and present. All this can be remedied by your loving cooperation now. Beloved Luara and I have worked almost alone in this endeavor heretofore - now I say to you as Jesus once said: 'Hitherto the Father worketh - now the Father and I work!'

"The creatures of the deep, such as the octopus, shark, killer whale (to mention but a few) have all developed their defense mechanisms as a result of their having contacted the 'killer' instincts in mankind's outer consciousness. As you continue to call for the purification of the Water Element and the redemption of these creatures, you will see them disappear from the ocean depths. It is a marvel to Me to see how many defenseless creatures on land and in the sea hunted by mankind have not developed a greater antipathy toward the human race and submit helplessly to the unnecessary slaughter - just for the 'sport'. However, these creatures so hunted really retrogress and, in each succeeding embodiment, carry more and more of a destructive and vindictive nature within themselves. Were it not for Our endeavors and the great assistance of the Elohim of Purity, Astrea and the Beings of the Violet Fire, many of the prehistoric monsters mentioned in legend and fable would still be a threat to those sailing the seas, both for pleasure and for business purposes. . . . "

" . . . In such places as New Bedford, Massachusetts, - once a 'whaling center', as well as in smaller fishing towns where in the past men made (and today, still make) a practice of 'following the sea' for a living, the inner atmosphere of those places is filled with destructive etheric records of the fear and sorrow of the sweethearts, wives, mothers, and children who have lived in those places and have had the experiences of losing their loved ones to sea. The removal of all such destructive etheric records and the purification of all such places is absolutely essential to the preparation for the coming here of the New Race to give them purer landed surface and atmosphere in which to live so that they will not have to 'tune in' in the future to those records of distress of the past and present. . . . "