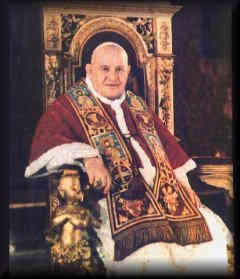 Beloved Pope John XXIII left his physical body on June 3, 1963. This precious Son of God has Ascended and become One with his beloved Mighty I AM Presence. He now has an Immortal Glorified Ascended Body, full of Eternal Youth and Beauty.

Pope John XXIII was born Angelo Guiseppe Roncalli, on a cold rainy morning in the little farming community of Sotto il Monte - "Under the Mountain". Angelo Roncalli, the name by which he would be know thereafter, was the third of what were eventually to be thirteen Roncalli children. Religion was as natural to the Roncalli's as breathing. On November 4th, 1958, Angelo Roncalli was coronated as Pope John XXIII on October 28, 1958. (1) 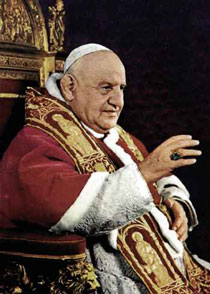 Angelo Roncalli was born in Sotto il Monte (Province of Bergamo), Italy, on November 25, 1881. The fourth in a family of fourteen, his family worked as sharecroppers, a striking contrast to his predecessor, Eugenio Pacelli, who came from an ancient aristocratic family, long connected to the Papacy.

Roncalli was ordained a Roman Catholic priest in the church of Santa Maria in Monte Santo on Rome's Piazza del Popolo in 1905. Ten years later, during World War I, he was drafted into the Royal Italian Army as a sergeant, serving in the medical corps and as a chaplain. In 1921, Pope Benedict XV appointed him the Italian president of the Society for the Propagation of the Faith. In 1925 Pope Pius XI appointed him as Apostolic Visitor to Bulgaria, also naming him for consecration as titular Bishop of Areopolis. He chose as his episcopal motto Obedientia et Pax ("Obedience and Peace"), which became his guiding motto. In 1935 he was made Apostolic Delegate to Turkey and Greece. In 1944, during World War II, Pope Pius XII named him Apostolic Nuncio to Paris.

In 1953, he was named the Patriarch of Venice, and, accordingly, raised to the rank of cardinal. As a sign of his esteem, President Charles de Gaulle of France claimed the ancient privilege possessed by French monarchs and bestowed the red hat on the now-Cardinal Roncalli at a ceremony in the Elysee Palace. 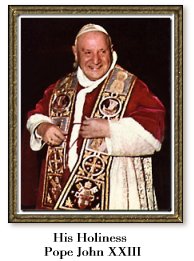 His pontificate, which lasted less than five years, presented him to the entire world as an authentic image of the Good Shepherd. Meek and gentle, enterprising and courageous, simple and active, he carried out the Christian duties of the corporal and spiritual works of mercy: visiting the imprisoned and the sick, welcoming those of every nation and faith, bestowing on all his exquisite fatherly care. His social magisterium in the Encyclicals Pacem in terris and Mater et Magistra was deeply appreciated.

He convoked the Roman Synod and established the Commission for the Revision of the Code of Canon Law. The faithful saw in him a reflection of the goodness of God and called him "the good Pope". He was sustained by a profound spirit of prayer. He launched an extensive renewal of the Church, while radiating the peace of one who always trusted in the Lord. (2)

To the astonishment and horror of aides, he called an ecumenical council less than ninety years after the controversial Vatican Council. While his aides talked of spending a decade in preparation, John planned to hold it in a matter of months. From the Second Vatican Council, or Vatican II, came changes that reshaped the face of Catholicism: a new Mass, a new ecumenism and a new approach to the world.

He met the Most Rev. Geoffrey Francis Fisher, the Archbishop of Canterbury, for about an hour in the Vatican on December 2, 1960. It was the first time in 400 years, since the excommunication of Elizabeth I, that Canterbury had met with the Pope. Pope John XXIII excommunicated Fidel Castro on January 3, 1962 in line with a 1949 decree by Pope Pius XII forbidding Catholics from supporting communist governments.

Known affectionately as "Good Pope John" to many people, in A.D. 2001 John was declared Blessed by Pope John Paul II, the next-to-last step on the road to sainthood. Following his beatification, his body was moved from its original burial place in the grottoes below St Peter's Basilica to near the main altar, and displayed for the veneration of the faithful. At the time, the body was observed to be extremely well-preserved - a condition which the Church ascribes to the lack of oxygen in his sealed triple coffin rather than to any miraculous event. Interestingly, this grave was later reused for John Paul II's own burial.

He is also honored by many Protestant organizations as a Christian reformer. Both Anglican and Lutheran denominations commemorate John XXIII as a "renewer of the church." 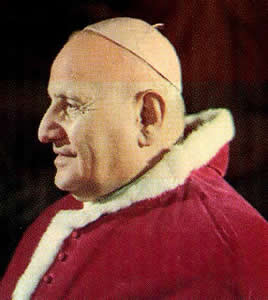