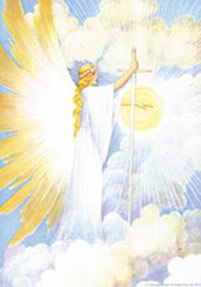 " . . . Therefore, beloved ones, remember from this night henceforth; that you have anchored within your hearts, the Light of Infinite Power and Intelligence which is your "Mighty I AM." You are a part of that Great Intelligence and Presence acting here! You have Its Power beating your hearts, acting within your human forms which you can intensify until it floods your being, world and government with Its harmonious Presence and Power. It is Light in which there is nothing of human creation that dare attempt to resist It. Do you see how you are dealing with a Power of Light which is All Authority? It brooks no interference of any kind! All you have to do is keep your feelings harmonized and call It forth into action; and there is no limit to which it will act for you, under that condition.

"Will you accept your Freedom now and with a determination you have never before experienced, face your human self and compel it into obedience to this Law of Life? What is obedience? Compelling it to be harmonious! That is all it has to do! Then, the Currents of Energy form the Presence will flow forth; produce health in the body; harmony in your achieve- ment and Perfection in your attainment; and any condition to which the attention is directed.

"Beloved ones, you do not but in a fragmentary manner yet comprehend the Power which is in the attention of every human being. It is limitless. When your attention is fixed upon an objective, the full Power of the energy from your Presence is flowing forth to your objective; and nothing in the world can stop its accomplishment but yourself. When you take your attention off, the energy stops. There is not one thing on the face of this earth which you could not achieve quickly. There is not one of you in the room who could not do it. Realize once and forever! every human being is compelled to make his own application to his own final Victory.

"Therefore, in the Glory of your Great Presence of all Life, I say to you tonight: stand glorified in the Mighty Activity of your own Mighty I AM Presence, and accept - first your Presence; then all the Ascended Masters and Great Beings of Light wish to give you; and you cannot imagine what They will do, if you are earnest and sincere. Accept the fulness of the Power of your Presence and the Assistance of the Great Ones! go forth! feeling the full Victory of the Light acting within you and your world! and you will find that you can lay your hand upon a discordant spot in your body; the pain will cease at once and the condition will dissolve and disapear. The Current which flows through your hand will produce Perfection for you. It is Light, which dissolves everything unlike itself.

"If mankind but understood that, every human being would become a Mighty Power and focus of healing wherever he went; and even the Radiance poured forth from him would heal where it passed. Such is the Joy and Perfection which is before you. . . . "

" . . . The secret key to the fulfillment of individual purpose in God is to be found in the Invocation of Cosmic Grace, in the Invocation of Faith in what has been called the Invisible World. This world need not remain invisible. It has been called invisible because the senses have become inverted to gaze only upon the imperfection of the physical planes. Man has not recognized the Perfection of the Spiritual Spheres. He has not recognized the Perfection of his own God Presence. In fact, during centuries of embodiments, he has not even known of the existence of that Presence.

"Now it is up to Us, who have been endowed with an understanding of the Law of the I AM, Individualized in the Presence of every child of God, to unveil the Higher Purpose. From time immemorial the blind who have led the blind have succeeded in promoting forms of religion based on superstition that have assuaged human needs without actually supplying man with the basic Laws of his own Being that would lead to his Freedom and Self-Mastery.

"But in the Chart of the Presence revealed by the Brotherhood of Light, the manifestations of the God Self (the Higher Self), the Holy Christ Self, and the human or lower self are perceived as three who agree in one. Through meditation upon this Trinity man recognizes, at last, that the human monad has the capacity, being at the opposite pole from the Divine Self, to obtain Grace from the equipoise of the Christ, the Universal Mediator, and thus to manifest for all time, point by point, the magnificent facets of the Law, 'as above so below'.

Yes, You Are a Star

"I, then, have chosen to be the Mother of Light, for in this calling I can be the Mother of every atom and electron of the Christ Consciousness emergent within the sons and daughters of God. I can be everywhere, for Light is everywhere. And wherever there is Light, I AM there, the Mother Flame, guid­ing, guarding and protecting the evolution of the cosmic spiral of each facet of the crystalline design.

"Long ago, wearing yet mortal form, as I gazed with won­der upon the stars in the heavens, I was meditating upon the Light  the Light of God, the Light of His Purpose within me. And as I looked up from the hillside, I saw the stars begin to turn and to whirl and to draw close to my consciousness. And I was transported from the outer senses to the inner senses, so that for a moment I traversed time and space into Infinity. And I saw the stars descend and enter my Heart, and I said:

"'Lo, I AM a Star! I AM a Flame with Starry Light.' And God said, 'Yes, you are a Star. You are a Star in Heaven and on Earth. But you are more than a Star. You are the Mother of the Star, for the Star has come to rest in the cradle of the Light of your own Heart.'

"I went forth from that hillside, and I came down to con­tact friends and companions. And do you know, the memory of the experience that God gave to me upon that hill enabled me, each time I communed with a part of life, to re-create the meditation of transcending time and space. And as I gazed with love upon the Heart Flame of those who would come to me, I had the same experience. The Fire in each Heart began to whirl, and then that Fire approached my own Heart. And I felt the embrace of Love, of Light, leap from that Heart to my own and the arc return from my own to that Heart. And once again I said, 'I AM a Star!' And I remembered the Voice of God, 'Yes, you are a Star, but you are more than that. You are the Mother of the Star, the Mother of Light.'

"I found, then, that as I communed with the Light within every Heart, I often did not perceive with an intense eye, the critical or analytical eye that so many among mortals have today  examining the face and the hair and the garments and the size and the weight of those whom they meet. For I was so entranced with the whirling Light and the Star in the Heart, however big, however small  the whirling Fire that came to me as Mother. It was a joyous discipleship. And my initiations came as trials and testings, as an opportunity to expand the Light, to nourish it, to harbor it, to challenge it.

"I found, then, that the multitudes began to draw to the Light that I had lifted up. As Jesus said, 'And I, if I be lifted up, will draw all men unto me." (6)

"As I lifted up the Light within myself and within the Hearts of men, I found that more and more people would throng my abode, and life became quick­ened. And there was much to do and much to assist and much to develop in the consciousness of mankind. And at one point I found that I had to retreat from the world and to go into solitary meditation upon the collective Heart Flames of all mankind.

"It was then that I learned that the healing of one can become the healing of the multitudes, as the multiplication of the loaves and fishes of mankind's consciousness. I found that as I could visualize the star whirling within the heart of one, I could see millions of whirling stars coming to my heart, being fanned and infired and expanded, and then returning to the hearts of millions. And so it came to pass that there was an exchange between myself and the multitudes of the divine fires, and I came to know oneness with all life.

"The communion, the freedom, the sublime reunion with life which God gives as opportunity to you this day is the opportunity which I knew. And I thought, as I contemplated my message to you this evening, that I would like to leave you with the vision of my own victory and my own overcoming. For to be called the Queen of Light is a high calling, and yet it is within the reach and the grasp of every one of you. You can begin as I began.

"Do you know that the Light is retroactive, that what you visualize today is projected not only upon the screen of the future but also upon the past? And thus, as you amplify within your consciousness the fiery core of starry bodies, the expan­sion in peripheral action will contact all Be-ness, all that you have ever been, all that you will ever be.

"Flood the universe with this Light. Take it step-by-step. Realize that you are not expected to be an avatar tomorrow if you are a neophyte today. Yet God holds for you the vision and the knowledge that you have the potential to fulfill your Glorious Destiny. For that is the kernel of Light that He placed within you. And so, while holding the highest concept of your perfectionment, God walks with you each step of the way, tutoring the soul, instilling within the Heart how to do and to be all that you are and all that you are to become. . . "