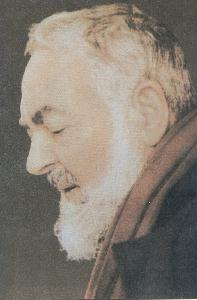 Padre Pio was born as Francesco Forgione on May 25, 1887. Francesco decided to become a priest at a very young age - perhaps 5 or 6. He was very devoted to God at an early age. Even at this young age he was very often being visited by Blessed Mother Mary and Jesus and his Guardian Angel. He finally fulfilled his dream of becoming a Catholic priest during his early teens, when he studied to become a Capuchin (one of the Franciscan orders). He took the name "Pio" when he entered the religious life. He received the stigmata (the wounds of Jesus in his hands, feet and side) around the time that he was ordained. He bore the stigmata for over 50 years.

Padre Pio Pietrelcina was a model of humility and virtue. Pope Paul VI said of him "Padre Pio was a man of prayer and suffering." He was loved by all who had the honor to know him. He was endowed with the Gifts of the Holy Spirit. Padre Pio performed many miracles in his lifetime and touched many lives.

Beloved Padre Pio made his transition from our physical world on September 23, 1968. On May 2, 1999 Padre Pio was beatified at the Vatican, and on June 16, 2002 Padre Pio was declared a canonized saint by the Roman Catholic Church.

Beloved Ascended Lady Master Clara Louise announced Padre Pio's Ascension, in which our beloved Padre became One with His Beloved Mighty I AM Presence. Padre Pio is now an Ascended Master - joining Blessed Mother Mary and Jesus - and becoming a part of the Ascended Host of Light.

" . . . And this is the beginning of actual bilocation. First you bilocate at the etheric level, then the mental, then the astral. And finally, physically, you will be as Milarepa  here and there  and other saints who have appeared and been seen, as in the case of Padre Pio. He was seen here and he was seen there, not always physical but very physical to the eye. He may have been seen kneeling in prayer from across the room. It may therefore be the etheric body that is seen, and by and by it is stronger and stronger until you, too, can say with Lanello before your Ascension, 'Lo, I AM everywhere in the Consciousness of God!' . . . "