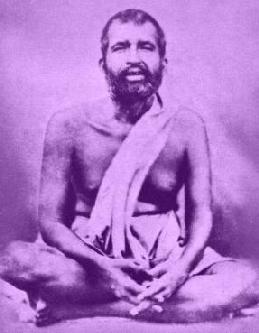 "The point is to love God even as the mother loves her child, the chaste wife her husband, and the worldly man his wealth. Join together these three forces of love, these three powers of attraction, and direct them all to God. Then you will certainly see Him."

After His embodiment in India from 1836 to 1886, Ramakrishna embodied one more time in the United States of America and became a member of The "I AM" Activity. He then Ascended and became One with His Beloved Mighty I AM Presence in the Victory of the Ascension.

"As the blessed child drinks in the nourishment of Life from the body of the Mother, so the Mother drinks in the Light of the Manchild that nourishes Her soul with the Light of the Heavenly Father incarnate in the blessed Son. The Mother is the eternal Servant of the Father. She is the Lifegiver unto the whole of creation and every creature. Therefore She is the most beloved, the archetype of the original chela.

"The Mother who is the All-Love of the cosmos, excelling and excelling in all life as Her Heartbeat becomes the heartbeat of Her offspring, is the dearly beloved of the Father. As Christ is the head of the Church and the Savior of the body of 'baptized' believers, even so the husband endued with the LORD's Spirit is unto the wife the ordained representative of the Father. (1)

"Now Adam (archetype of Father whose Selfhood includes that of Mother) became the first chela of Maitreya and as such he was the LORD's representative unto Eve. She then became the second chela in the Order of the Edenic Hierarchy and was subject unto him  and should have remained so  as unto the Guru. So it is the Divine Plan for twin flames who bear the relationship of Alpha and Omega one to the other.

"By and by in the cosmic evolution of twin flames, the Lord of the household transfers to the beloved wife the full mantle of the Guru. And lo, in the Matter spheres it is Mother and the Mother flame who becomes the Guru unto all of their children. And she the servant of her Maker who is her Husband (3) now becomes the Lord of His vineyard. (5)

"So it is with the Ascended Master Ramakrishna whose spouse and beloved twin flame, Sarada Devi, remains unascended in the community of lightbearers, wearing His Mantle  she the anchor of His Love, He the Lifeline of her anchor.

"Thus the Maha Kali of the East, the great brooding Mother of all worlds, becomes the highest object of the devotion of Gurus and chelas alike. For she and she alone holds in Her Heart a Crystal Point of Light that is the Image of Ishwara. Ishwara, the LORD of all worlds above and below. He whose Image is the Face of the Son of man takes up His abode in the Heart of Mother. By this, by this She alone is Guru." 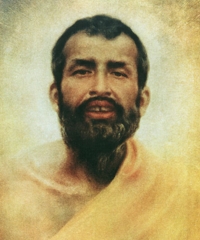 "Kali, 'the power of time.' Kali is a symbol of destruction, Who appears with black skin wearing a necklace of skulls. Yet She bestows blessings upon those who seek knowledge of God and is revered by Her devotees as the Divine Mother. As you know, She was the chosen Deity of Ramakrishna."