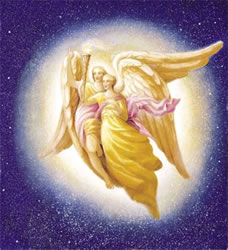 " . . . But I would ask you this day if you will not pray that the World Teachers and the Hierarchies of Illumination might release to the instructors and teachers among mankind, and especially to yourselves, new and advanced methods of teaching all subjects.

"We have released some of these methods to the teachers and the sponsors of Montessori International, even as We released that method to Maria Montessori. But I tell you there is so much to be delivered that We can have many amanuenses among the teachers of the world. For it is Our desire to set forth for these little ones, who desire to be the forerunners of the Golden Age, practical methods of reaching them with all facets of the Law. And so after you have attended the Ascended Masters' University, and also during that period, I trust you will invoke My Flame, and ask Me to intercede with the Cosmic Christ for you, to release methods of teaching, the Teachings of the Brotherhood, on film, in all forms.

"Some of you are fond of the artistic work of Walt Disney, who was also inspired by the Brotherhood to teach the ever new truths of Life to the children of the world. Many children have no knowledge of the Cosmic Honor Flame, of fairies and Angels and Masters, except through the films of Walt Disney.

"Now has come an era when We desire to make films depicting the Ascended Masters' Retreats, depicting the facets of the Law, the movement of the Flame, the lives of the elementals. We desire to show on screen before all mankind how the Violet Flame works in the elemental kingdom, how these little creatures respond to the calls. We desire to show how an individual invoking the Flame of Illumination at one point on the planetary body can cause an entire spiral of ideas and ideational patterns to flow into the minds of one or several or hundreds of individuals who are seeking knowledge at another point on the earth.

"We desire to show the harmonics of the Music of the Spheres, the rhythm of the mighty Elohim and Their Sacred Tones. We desire to sound these Tones at the physical level so that mankind might perceive these Tones. And then We shall show in moving picture how these Tones are able to actually change the cell patterns and the cell formations of children, of those who are incarcerated in mental institutions and in prisons, those who are lost to society because of their own rebellions against the Law. . . . "