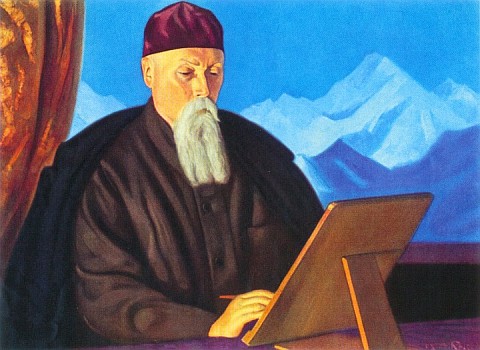 " . . . . It is a world of noise. This noise affects the Heart and the Heart's attunement with the Infinite. Seek the solace of quietude in Nature and in the place you have prepared for your communion. For in the hour of your communion, beloved, the shaft of Light from the Above to the below does manifest and you begin to glow with Light as you meditate and Decree. And that glowing Light, beloved, becomes an electrode in the earth and many souls receive strength, refinement and nourishment from your effort.

"I AM the Ascended Master Nicholas Roerich. I AM surely rich on the 'Royal Road of Integration', and in My Being there is Light enough for all. And My Angels, each bearing Cups of Light, distribute My Light daily to all devotees who are on a wavelength to receive it.

"Remember to call for my Cup of Light. I will give it you each day, beloved, as long as you are on the wavelength of the ascending one, the aspiring one, as long as you fear not to follow the Mother of the World up the mountain. For She who leads you, beloved, is truly the One that long ago, sometime, somewhere you have forsaken. This time do not let go of Her Garments, but let Her lead you where She would take you, for She does indeed embody the Will of the Father.

"Sometimes you will conclude that the way She has led you must be wrong, for 'look at the evidence.' But, beloved, She who leads sees the future and beyond. Therefore, cast thyself upon the breast of the Mother and do know that in all of Cosmos there is the dependency upon that One. And that One multiplies Herself infinitely so that all may know that they walk and talk with the Mother.

"Truly, do adore that Mother, beloved. Truly do raise up that Mother within you. Truly greet Her: 'Hail, Mary! Hail, Kwan Yin! Hail, O Thou Magnificent One of the Ages! Hail, O our Mother of the World!

"Into the arms of Her Presence and into Her Garments I recede, for in the Heart of the Mother is perfect communion and the entrance to samadhi and nirvana. By that entrance gained, so Siddhartha Gautama entered the heights of the Divine Union with the Mother and returned with that teaching that does abide with us forever.

"Therefore, in Her Name and in the Name of Lord Gautama, I say, let us fling all inordinate desire into the Fire, the Agni! Let it be gone in the twinkling of an eye! It is not real. It has held [and holds] no power over you. And I call to the Five Dhyani Buddhas to neutralize the five poisons within you, but you must claim [the answer to my call] yourselves.

"O my beloved, the riches of the Kingdom of God know no bounds. Yet the greatest riches are to be found in soul by soul by soul becoming that glowing Light that shall never be extinguished.

"Be the unextinguishable ones! For then I shall be with you always." 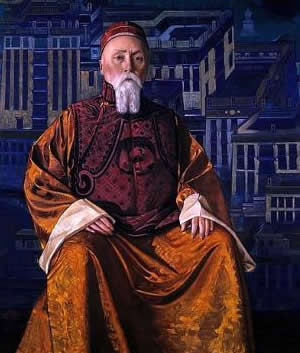 Nicholas Konstantinovich Roerich was born in St. Petersburg, Russia, on October 10, 1874, the first-born son of lawyer and notary, Konstantin Roerich and his wife Maria. He was raised in the comfortable environment of an upper middle-class Russian family with its advantages of contact with the writers, artists, and scientists who often came to visit the Roerichs. At an early age he showed a curiosity and talent for a variety of activities. When he was nine, a noted archeologist came to conduct explorations in the region and took young Roerich on his excavations of the local tumuli. The adventure of unveiling the mysteries of forgotten eras with his own hands sparked an interest in archeology that would last his lifetime. Through other contacts he developed interests in collecting prehistoric artifacts, coins, and minerals, and built his own arboretum for the study of plants and trees. While still quite young, Roerich showed a particular aptitude for drawing, and by the time he reached the age of sixteen he began to think about entering the Academy of Art and pursuing a career as an artist. His father did not consider painting to be a fit vocation for a responsible member of society, however, and insisted that his son follow his own steps in the study of law. A compromise was reached, and in the fall of 1893 Nicholas enrolled simultaneously in the Academy of Art and at St. Petersburg University.

Together with his twin flame and wife, Helena, Nicholas Roerich founded the Agni Yoga Society, which espoused a living ethic encompassing and synthesizing the philosophies and religious teachings of all ages. In 1904 Roerich painted the first of his paintings on religious themes. These mostly dealt with Russian saints and legends, and included Message to Tiron, Fiery Furnace, and The Last Angel, subjects that he returned to with numerous variants in later years. The Treasure of the Angels was described by one writer: A host of angels in white garments stand silently row after row guarding a mysterious treasure with which are bound up the destinies of the world. It is a blue black stone with an image of the crucifix cut into it, glowing with emerald hues. The angels are an early depiction of the hierarchical Masters that peopled the heart of Roerich's belief in a Great Brotherhood, watching over and guiding humanity in its eternal journey of evolution. The stone pictured by Roerich is the representation of an image that recurs in different forms in his paintings and throughout his writings. The word treasure figures prominently in the titles of many of Roerich's paintings, as, for instance, in The Treasure of the Mountain and Hidden Treasure. It is clearly not material wealth that he refers to, but rather the spiritual treasures that lie buried, yet available to those with the will to unearth them. (2) 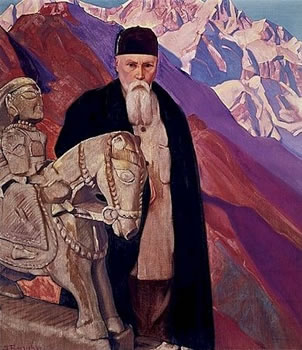