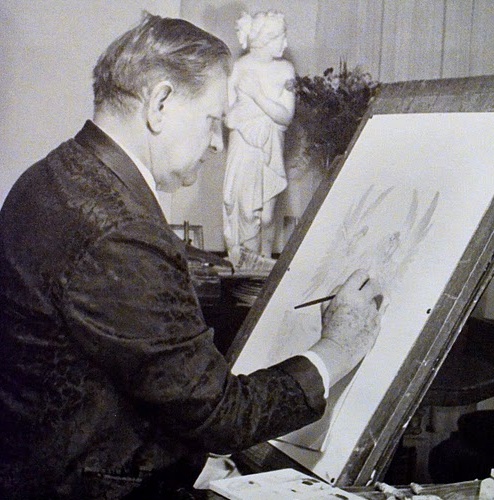 In September 1929 Charles Sindelar painted a portrait of Jesus Christ as He appears today in His Ascended Master Body. He had personal visits from Jesus at 2:00 A.M. for 22 consecutive nights at 6200 Fountain Avenue, Los Angeles, California. In 1935 beloved Saint Germain also posed for Mr. Sindelar's portrait of the Ascended Master Saint Germain in the Hotel Richelieu, 1050 Van Ness Avenue, San Francisco, California. From 1936 to March 1942 He published and assisted in the production of The Voice of the "I AM"®, monthly magazine. He created the artwork at Sindelar Studios, 2600 S. Hoover Street, Los Angeles, California, U.S.A. (7) 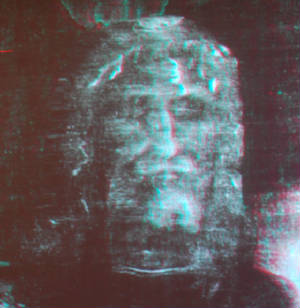 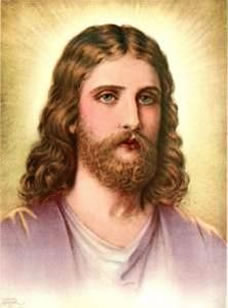 " . . . And let it be known that this Image of Myself which I have released through the artist Charles Sindelar is indeed the very same Image that you will find on the Shroud of Turin, and it is unmistakable. (8) And therefore, you will know that I have appeared to many saints throughout the ages. And I have spoken through many Messengers who have appeared to deliver, by the Miracle of the Holy Spirit, the Healing Light, the Gift of Wisdom, and the Teaching of the Way. And I have sealed unto this witness the understanding of each one's own God-Reality, and none shall tear it from My own!

For those who are called of the Father will know Me as I AM and will not have the power to distort Me or My Name or My Image or My Presence. For I AM yet the Good Shepherd and I stand with every disciple on Earth who is true to the calling of the Son of God! And those who are yet weak, I strengthen when they pray and when they acknowledge that Universal Christ, not alone in Me, but as the Divine Image out of which they also were made. . . . " 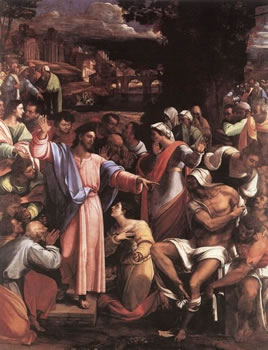 
Here are some interesting recollections of Charles Sindelar, written by Virgilyn Brown, an "I AM" Activity student who joined in 1934 together with her family. She is perhaps the only person who was present in the Ascension Services of all three Ballards (Guy Ballard, Edna Ballard, and Donald Ballard) as well as Charles Sindelar.

Charles J. Sindelar was a wonderful man who had many fascinating events take place in his life. Here is just a glimpse of that life, including the story behind the portrait of Beloved Jesus, "The Head of Christ".

When Charles was a young man, there was a neighbor with whom he often conversed. They would sit on her porch and talk. He enjoyed tremendously having her as a friend. One day she invited him to the church she attended. He found his friend was on the platform and then he learned she was Mary Baker Eddy. (Mary Baker Eddy had previously been embodied as Mary, the sister of Martha and Lazarus. - ARC editor)

Early in his career, Charles had been able to master the art of oil painting as well as water color, pastels and etching, which is the most unusual for an artist. In these early days, he made the trademarks of Aunt Jemima Hot Cakes, Prudential Life, "The Master's Voice" (Victor) for RCA, New York Life, the Oneida Community Silver Company and Quaker Oats.

By the time he was seventeen, he had made a fortune. Seemingly, everything that Charles touched or was a part of has been sustained. When Beloved Jesus asked that the magazine, The Voice of the "I AM", come forth, Charles did the art work for several years and it is till sustained.

When Charles came back to his body after the four days, he had a strong feeling to visit Ben and Dorothy Ensor and their group in San Diego and my mother and our Group in Oakland. The Sindelars arrived in Oakland the week before Ascension week.

On Tuesday Charles was invited to be on the platform. He accepted and was on Tuesday and Wednesday. Mrs. Self in San Francisco heard that Charles was in the Bay Area so she invited him to speak to her Group on Thursday. He started to go but ended up apologizing to Mrs. Self saying he could not make it. He returned to Oakland and went on the platform for the third time that Thursday night. There must have been some Inner reason for him to be on the Oakland platform three times. Often we see the triple activity.

When the Sindelars visited Oakland, we would take them out to different meals. This time, Charles said, "Oh, I feel like strawberries".

The waitress said they did not have any strawberries, but they sent out and bought strawberries, and Charles was served straweberries. Another time, we went to the Confucius Restaurant for a Chinese dinner. They had the most beautiful peonies. Charles commented on those beautiful peonies and when we left, they gave him a peony. Everything he wished for was handed to him. It was the most beautiful experience.

At this time my mother and I were living in a little studio, now a jewelry store. My mother, who was a good cook, was getting some food after the meeting. Charles Sindelar was talking to Mother, and said,

"Oh, Doris, I had so many wonderful talks with Brownie. We would just sit down and talk about different things".

Mother said that she wanted to ask what they had talked about, but decided to wait until she visited him in Los Angeles. This was just a week before Ascension Day and the next day on Friday, the Sindelars returned to Los Angeles.

It was not easy to have them go. He was so luminous and we just did not want him to leave. His skin and the touch of his hand was just like Beloved Daddy's, always soft and loving. My mother had that touch, as does Frederick Landwehr. Very few people have that unusual, loving touch. Just before Charles left, he let my mother and me hold the symbol that was given to him by Beloved Saint Germain. We were not to look at it and we did not.

One week later, on Ascension Thursday of 1947, Charles Sindelar at the hour of the Jesus' Ascension stepped through into his own Ascension. Beloved Mama (Edna Ballard - ARC editor) said he did not take the three days usually needed to withdraw the Light Pattern, he just stepped right straight through. Beloved Mama had the Service out under the pepper tree in Los Angeles at the White Temple. 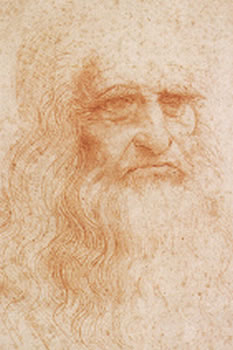 
Leonardo had been born in 1452 in Vinci, Italy and passed away in on May 2, 1519. Of all the men who contributed to the revival of artistic and intellectual achievement that was to be called the Renaissance, none was more remarkable than Leonardo da Vinci. Others may have equaled him as an artist, but nobody else of his time possessed in such a high degree the curiosity about the physical world which is the foundation of modern science, combined with mastery in the arts of painting, drawing, sculpture, and even architecture.

While it is the paintings of Leonardo that have brought him fame over the years, the full range of his talent can best be seen in his drawings. From a very early age, Leonardo is said to have shown exceptional ability in geometry, music, and artistic expression. However, little more is known about the education and training of Leonardo da Vinci, and it is assumed by many that much of his learning came not from traditional sources, but from his personal observations and the practical application of his ideas.

Leonardo da Vinci was a man of many talents. Leonardo was a painter, sculptor, architect, musician, engineer, inventor, and scientist. In his performance of anatomical dissection, Leonardo experienced the satisfaction of putting both his artistic and scientific principles into practice. Leonardo was also a great engineer and inventor. There were many instances where Leonardo was commissioned by the government to design elaborate state buildings or churches or to conceive of new weaponry that if ever utilized would have taken the enemy by great surprise. Not only was he a great inventor, Leonardo da Vinci was one of the greatest scientific minds ever to have lived. His genius was unbounded by time and technology, and was driven by his insatiable curiosity, and his intuitive sense of the laws of nature. Da Vinci was dedicated to discovery of truth and the mysteries of nature, and his insightful contributions to science and technology were legendary. As the archetypical Renaissance man, Leonardo helped set an ignorant and superstitous world on a course of reason, science, learning, and tolerance.