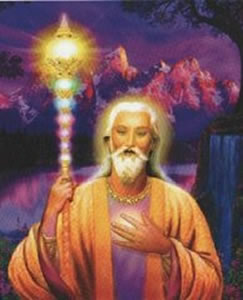 " . . . I AM Lord Lanto, Chohan of Illumination's Ray. I impart the Consciousness of Wisdom to the Sons and Daughters of God, so they can first know who they are and then act upon that knowledge as they internalize the Flame of God, the Threefold Flame of the Heart that speaks to their every endeavor in life, if they will allow the Heart to open.

"So many go through life locked away in the recesses and the depths of their mind, and the workings of the intellect, never knowing the Illumination of the Heart's Flame imparting to that mind all of the Golden Light of the Sun that would bring newness of life, expressions of God Identity in every pattern and detail imparted to each of the spiritual centers of Being, so that one might create, precipitate, manifest more of the Golden Light of the Sun that is to shine upon all Sons and Daughters. This Golden Sun bathing the consciousness brings about the Golden Age culture and the reemergence of Divine Mother Light that each one may revel in as they fulfill their Fiery Destiny.

"For some time, you have only known My Flame as the Chohan of the Second Ray of Illumination. You have likewise understood that I stand fully engaged with My Conscious Attention upon the youth and the children of the world that they may have imparted to them the Divine Culture, and education in their True Identity. What many may not know is that I once lived in embodiment during a time where there was such a Divine Culture that many have referenced as one of Earth's true Golden Ages.

"I hold in My Consciousness the understanding of the education that is required of each of the vehicles of your consciousness, so that you might produce such a Divine Life as I lived then; where all about you, you see the Glories of God, the wonder of creation, the magnificence of the Divine Mother Light bringing into manifestation the Purity, the Beauty, the wealth of the Abundance of God.

"When your consciousness becomes as trained as mine was then, even in this very hour, you can begin to live that Golden Age, and indeed, this is how these cycle must begin. For if you do not have the Vibration required to anchor the Fire of your own God Consciousness into these outer vehicles, how will you pass on a Torch of Light to the next generation? How will they be taught? What will be the example you set? Will you have internalized all that has been imparted to your mind, moving the charge of Light into the emotional body, forming and fashioning new creation by your hands, and endeavoring to live a life that invites the descent of the Golden River into the midst of your world?

"This, Blessed Hearts, is such a great Opportunity. For if enough Sons and Daughters are willing to awaken to the Christ Consciousness, imbued with their own Causal Body momentums of Victory, you will realize a Golden Age before you know it! . . . "

" . . . Many of Our servants upon Earth become temporarily discouraged as they gaze upon the outer world (dis)order and the frightful forces that now have so much of society in their grips. Each chela, regardless of how long he has served Our Cause, must be aware that this discouragement, too, is intended by the dark ones. He must also realize that the mass consciousness of mankind is completely controlled by astral forces and that only through the united efforts of the minds and hearts of the chelas of Freedom, the disciples of Limitless Expression, can there be found Hope to change the world and to produce some semblance of order out of world chaos.

"Let men continue to have Faith; for if it is frustrating to mankind embodied to cope with these situations, consider for a moment what it is like at Our Level, where We are forbidden to interfere with the doings of men except when invoked by you or others among mankind. As a part of the Godhead, as a part of Hierarchy, as a part of the Brothers, we must conform to the Laws of God regarding Himself, and We must answer only when called upon. Because the relatively few know Us and call upon Us, there is therefore little that can be done at times when great need exists.

"The key to it all lies in the expansion in the world of form of the knowledge about the Brothers of Light, about the Spiritual Hierarchy, about the Ascended Masters, about the natural unfoldment of the individual through his own Beloved Mighty I AM Presence. Unless this be done, the world will not suddenly turn to the Light. It has never been enough simply to produce great lights in the world. Some of these go down in the halls of fame and are remembered in the annals of every age. But deeds are more important than names, and the face of pure Truth is more important than to speak about It.

"We urge upon those of you today with whom We have contact to understand that all of the Glory that is held focused on all of Our Retreats in the world has little meaning for embodided mankiknd unless We can accomplish in your time one of two things: either (1) the broad expansion of the knowledge of Our Work, or (2) the laying of a foundation for that Work to be expanded in succeeding generations. . . . "

" . . . It always touches Us when reference is made to that great civilization that once reached so great a height on the continent of Mu in which We were a part; and to know that steadily and surely in the outer world and memory of mankind is coming the acknowledgment of these great civilizations that have been, that mankind may no longer be deceived by remnants which the sincere seekers, the scientists, have been become cognizant of - because that was but the lowest ebb of those great civilizations that were once so wonderful and whose Light was so Great.

"And so tonight, once again, We call your attention to this great period when the Light blazed forth so greatly, even among the mass of mankind. Now you are again entering into the Upward Blazing Power of that Light which shall be eternally sustained, never to retrograde as the civilizations have been before - but the final Golden Age upon Earth in which mankind shall once again reign in that Great Supremacy of the commanding Mighty I AM Presence. And only in the conscious, the outer conscious acknowledgment of this 'Great Presence', has any civilization ever been enabled to reach its great height. . . . "

" . . . So you Blessed Ones, hold with mighty firmness the Invincible Awareness of your Mighty I AM Presence about you by the Conscious Command that you may forever remain free of any intrusion of destructive human creation. It will not be long until its great momentum that has been fed by the feeling of mankind will steadily and surely lose its power. Then what a rejoicing among mankind, as one by one, they awaken as from a long sleep into an Alertness, the Joy, the Glory of that real Life which is active even now within the human form. Oh! how long mankind have slept in the action of human creation! How long have they limited themselves by intellectual human concepts, more and more growing into the density, until at last the density grew so great that the Call had to come from someone among mankind and begin the Release of that Great Light that is the Light Pattern of every human form in existence. And when that Momentum gains more and more, that Great Light will spread throughout the Earth, and then the Reign of Light and Glory will have found Its Own again.

"It does not, in your enthusiasm of your Mighty I AM, take long periods to accomplish - to be blessed by the Great Light which beats your Heart. It only means a firm determination to refuse acceptance and not give power any longer to these human, limiting appearances. It is so very easy to keep the outer reminded that every discord that shows an appearance, every limiting thing that shows an appearance, say to it as you would speak to a disobedient pet of any kind: "You have no power! I withdraw from you all power that I have ever given you. Stand aside and be gone from my world!" And so shall it be compelled to give immediate obedience.

"'Mighty I AM Presence, take Command of me, my mind, my body, my home, my world. Take Full Charge! Command everything in Obedience to Thee, and pour forth Thy Mighty Energy, Thy Mighty Radiance, to produce Perfection in everything I do! In every thought I have! And in every feeling that passes through me! Charge it with Your Mighty Direction!'. . . . "