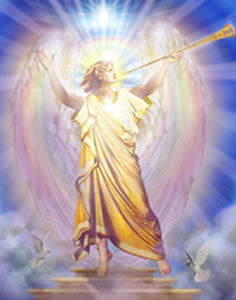 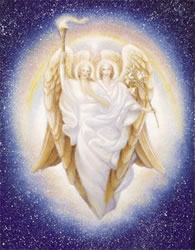 The Transfiguration, the Resurrection, the Ascension

" . . . Oh, beloved people! The mankind of Earth are prisoners of the senses. The beam of Energy and Light which animates the human body and flows uncontrolled through the senses, anchored into the substance of Earth, is the gravity pull more strong than the power within the soul to rise into a harmonious state of being!

"If We could, through those of you who profess to love Us, manifest an example of God-Mastery which would register through the sense consciousness of mankind, Our Victory would be assured. The Mission of the Master Jesus remains yet one of the most brilliant comets which has flashed across the pages of history, because that Mission was performed through the Flesh of His Body through His Works and not only through the Words from His Lips!

"The Transfiguration, the Resurrection, the Ascension were manifest facts which the sense consciousness of mankind confirmed and could not deny. The risen dead, the sick made whole, were manifestations of the Law externalized, proving the mastery of the God-Life. That must come again through men and women willing to live in a state of Grace. Mankind has played with that word for centuries. I would ask you to think upon it deeply. The Vibratory Action of Heaven is Harmony. The Vibration of every Master and Angel and Deva, of the Godhead Himself and His Great Celestial Counterpart, is Harmony. When you are within a state of Harmony toward Life, you are in a state of Grace. That means that your energy can connect with the Harmonious Energy of any Ascended or Cosmic Being on an instant, and that They, in turn, when occasion demands, may use you as conductors to flash the Flame of Protection, of Healing, of Balance, through a city, a nation or an entire planet.

"Energy and vibration are impersonal, beloved ones, and the state of the vibratory action of your inner bodies either connects with the Ascended Master Octave or the psychic and astral realm in which, unfortunately, your physical bodies are presently forced to move. When you are in a state of Harmony, of Tolerance, of kindly Peace, your vibratory action is one with the Kingdom of Heaven which swings all around you - and at any moment the Master Powers of the universe may reach you as the requirements of the hour demands. If Our beloved Mary, for instance, at the moment ordained for the Visitation and the Annunciation had for some reason not been in a state of Grace, the moment would have come and gone, and I should not have been able to connect My Energies with Her world. Think of it! Who knows when that moment may be! A constant state of spiritual preparedness has been advised in Our Biblical lore. Please maintain a constant state of vigilance, a constant preparation and sustenance of Purity, Harmony and Balance within your inner bodies - for no one knows the hour that the Bridegroom cometh. For each man it shall be a different hour. For each lifestream the moment of contact between the Holy Christ Self and the outer consciousness will be at a different moment, dependent upon the momentum of the centuries, dependent upon the contemplation of the lifestream and certain Cosmic Currents that the Holy Christ Self would utilize. . . ." 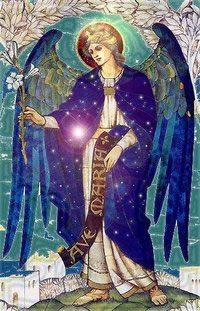