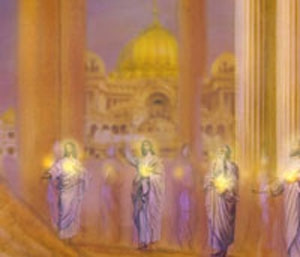 The Names and Flames of The Seven Holy Kumaras are:


You can read about the Individual Flaming Ones who together form the Mandala of The Seven Holy Kumaras (also known as The Seven Sons of Brahma) on the following pages of The Secret Doctrine (original 1888 page numbering):

The Beloved Seven Holy Kumaras have over millions of years given much of Their Light, Love, and Life to assist in the forward evolution of Earth into Freedom's Star! Their Flames are intricately woven, at every level, into the very structure of our being. Up until now, most have only heard of One of the Holy Kumaras: our beloved Sanat Kumara. Much information about the Other Kumaras, as well as Their Names, was given through The Theosophical Society since 1888.

You can also familiarize yourselves with Them through listening to the first public addresses of 6 of the Seven Kumaras in the 12 CD album "The Daystar Festival - The Stepping Forth of The Holy Kumaras " which were recorded July 4 through 7, 1996 at The Temple of The Presence.

Please click here to enter The Temple of The Presence bookstore to place an order.

"The Seven Kumaras, whom some Inner students have known as 'Lords of the Flame' from Venus, were the Only Ones from this entire system of planets, who of Their Own Free Will and Infinite Love, offered to guard the children of Earth and assist their upward progress. They came and gave transcendent help here at the most critical period of Earth's growth. It was the time of initiation that is most dangerous in the Life of a planet and its humanity, but through Their protection and guidance, the goal was attained and mankind has been enabled to reach the 'Greater Heights.'

"Many of the Brothers understand that every twentyfive hundred years the Kumaras release a greatly increased outpouring of Cosmic Love, Wisdom, and Energy. This Blazing Light and Transcendent Radiance flooding the Earth and its inhabitants, interpenetrating all, is a tremendous lifting process, and gives a forward impulse to the growth of the entire Earth, as well as its humanity.

"Just preceding each of these Great Outpourings, extraordinary physical disturbances occur, and general unrest is felt throughout by the people. Such disturbance is due to the discord that has accumulated during the last of the preceding period. The generation of such inharmony is due, always, to the wandering away from the fundamental 'Principle of Life' and the human sense disturbance thus created pollutes the outer activity of mankind, the Earth, and its atmosphere.

"It is to cleanse this, and bring humanity back to the Original Purity of Life that cataclysmic action takes place. It is following these periods, the Kumaras release an enormous Outpouring of 'LIGHT' to illumine and strengthen Earth's children, ultimately enabling them to make the Supreme Attainment.

"We are approaching another such period, and this time the release of the Great Cosmic Love, Wisdom, and Energy, the Mighty Rays of Light, will not only quicken the minds of the race but the atomic structure of Earth as well, making it more 'Luminous' in our solar system. Never, since these Great Lords of the Flame came to Earth, have conditions permitted such a Great Outpouring to take place as will occur ere long. Many, who have seemed to become hardened by their former activities, will awaken, as it were almost overnight, and feel the Nearness of the Great God 'Presence' within each heart. Many, who have been meek and humble but holding close to the 'Inner Presence,' will suddenly blaze forth, amazing themselves, as well as others, by the Transcendent Light, they will manifest. All will be done by the Power of God-Love, and humanity will truly begin to realize that it is the height of folly for one part of God's Creation to war against another part.

"The desire to bless others instead of themselves will almost involuntarily enter into the hearts of mankind, and send forth a Light that will illumine the rest of the 'Way to Perfection.' Selfishness alone holds the children of this sphere in the bondage and misery which have been allowed to express upon Earth, but when the 'Light of the Christ' expands the 'Love in the Heart,' selfishness flees and returns to the Sea of Forgetfulness.

"Great, natural physical changes will take place. Two Great Centers of Light will pour forth their blessing to humanity - one, the Glorious Glistening 'Presence' of Shamballa in its Dazzling Radiance, and the other will appear in the United States, not however where any so far have been led to believe, but at a point which has not yet been indicated to outer channels of the world.

"During the present activity of assistance and intense outpouring of Light by the Great Ascended Host, who assist the children of Earth, hundreds of humanity will find their present physical bodies being quickened by the rapid raising of the vibratory rate and, as this is completed, will realize that human, physical limitation and discord have dropped away like an old worn-out garment; and that they, the Children of Light, stand forever at One with the 'Flame of Life-Everlasting' and the 'Perfection of Eternal Youth and Beauty' a visible, tangible Reality.

"Beloved children of Earth, you stand upon the Threshold of the Ages. Its Door is being held open by the 'Great Ones of Love' who ever invite you to walk consciously by their side in the Light. No matter what the activities in the world without, walk with the Light and in the Light, regardless of appearances. Then, will you find a Master of the Light, who has trod this self-same path before you, ever watches and stands by your side revealing the 'True Way'. . . "

"The name 'Kumara' is a title, so think of it as an Authority. The Activity of the Kumaras is distinctly different from that of the Masters from the Central Sun. While the Kumaras come under the Activity from the Central Sun, yet Their Service to the Earth is distinctly different. Of all the seven Planets, They are the Ones who offered to take the Earth under Their supervision - under Their wing, so to speak.

"As soon as the axis of the Earth is changed, the Kumaras' Work of countless centuries will be practically completed. There will be a few years in which They will walk and talk with the Students of Light who are truly aware of their Presence, which will bless the Students untold who receive Their friendly visits. There has never been such an Opportunity in the history of the Earth as at present for those who have any inclination to the Light - and even for those who have not - to be raised enormously.

Please click here to enter The Temple of The Presence bookstore to place an order.

" . . . As We inspired the leadership of Abraham, Noah, Moses, and other great patriarchs, as We spoke through Zarathustra, Apollonius of Tyana, and Jesus, as We released Holy Wisdom to Socrates, Plato, and Emerson, so did We come through Madame Helena Petrovna Blavatsky in Isis Unveiled and The Secret Doctrine . . . . "

" . . . In 1876, Helena Petrovna Blavatsky was ordered by the Master Kuthumi and Me, then known as the Masters K.H. and M., to write Isis Unveiled. Later she was given the responsibility of imparting The Secret Doctrine to the world. . . . " (5)